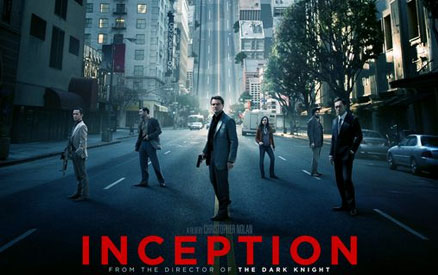 But what the hell does it all mean?

SPOILER WARNING. I purposefully left my review vague, so you could read it without having seen the movie. No such promises will be made here>

It’s understandable if you’re left scratching your head at the end of Inception. I think you’re meant to be. Nolan and co. leave it purposefully ambiguous, and I think that way you read the film is dependent on your personal world view. The way you read the film, by the way, can also help determine how much of a masterpiece you think it is – certain interpretations eliminate any potential plot holes, while others turn the whole film into plot holes. You might think this is because one interpretation is “right” while the others don’t make sense, but I think Inception beggars that type of simplicity.

The film that Inception most recalls is, somewhat obviously, The Matrix. That is a movie similarly obsessed with playing with, exploring, and deconstructing our views on reality. However, unlike The Matrix, which played more to a philosophical crowd in between the intense action scenes, Inception isn’t interested in name dropping established philosophies. It establishes its own world with its own rules, and more or less follows those rules in its pursuit of philosophical truth (I would argue that The Matrix, in contrast, synthesizes given philosophies and picks and chooses from those philosophies in its pursuit of truth). In this way, Inception is the more authentic exploration, since it never feels bogged down by the pretentiousness that eventually sunk The Matrix.

The film also recalls Nolan’s own Memento, which plays with the ideas of the frailty of memory and reality, and with the mind’s own desire to protect ourselves. Given the question of interpretation, I actually think this is the more telling comparison. For those of you who haven’t seen it, Memento tells the story of Leonard, a man who loses his short term memory around the same time his wife is murdered. He spends the majority of the movie trying to track down his wife’s killer, while dealing with the limitations of a disability that makes it impossible to understand his own interpretation of the universe around him. In the end, he can’t even really trust himself.

The movie establishes a world where people can enter each others’ minds and then leaves it at that. It never explains, nor should it. This is the universe we are asked to accept, and our acceptance hinges on the idea that the universe itself has a set of determined rules to be followed. Our ability to interpret this universe, therefore, is dependent on these rules and how accurately applied they are.

In Inception, our protagonist is Cobb (DiCaprio), an “extractor.” Basically his job is to go into people’s brains and take out their secrets, and as we are told he is one of the best in the business. The movie follows him as he attempts the opposite, namely inception, where he gives a person an idea. The movie’s established rules for both extraction and inception are that once the brain realizes that a person or idea is false, it fights it off like a virus. Thus true inception is practically impossible, because the brain necessarily understands that the implanted idea is foreign and destroys it.

In theory that’s the plot. It’s the reason why Cobb gathers together his team (Gordon Levitt, Ellen Page, Tom Hardy, etc.) and it’s the attempt to infiltrate Cillian Murphy’s mind that drives the films action. However, the most exciting, frustrating and intriguing questions come up within Cobb’s own story.

Cobb has a past, the uncovering of which is the actual fuel of the plot. To synthesize, Cobb was once married to Mal (Marion Cotilliard) and had two adorable children with her. They were both interested in exploring the potential of the dream technology. They pushed themselves too far, and ended up in limbo (a sort of purgatory for the dream-explorers, where time moves so slowly that you can live out decades of your existence and if you’re not careful your brain can turn to mush), where they lived out a full life together. However, Cobb was always aware that this world was fake. Mal, on the other hand, hid that knowledge from herself, and therefore gave herself over fully to the dream world, losing her sense of reality and eliminating her ability to “kick” back to reality. In order to combat this (AND SUPER SPOILER WARNING COMING HERE), Cobb planted the idea in Mal’s subconscious that her reality was fake. This is how he knows inception is possible. It also, however, is how he knows how dangerous this all is.

See, once Cobb and Mal got back to “reality” (and again, this is all open to interpretation), Mal still had this idea in her subconscious that her reality was inherently fake and that the only way to escape was to die. So she killed herself, begging Cobb to follow her to freedom. Cobb, tied to reality by way of his children, refused, and she framed him for her murder. Cobb then fled the country, and became a dream thief, desperately trying to get back to his kids. He’s in this state when Ken Wattanabe’s businessman, Saito, approaches him to try out Inception on Cillian Murphy. But he’s haunted by the “ghost” of Mal, who foils his attempts at both thievery and inception, and constantly reminds him of his own guilt and causes him to question his own sanity. On top of this, he’s no longer capable of normal dreaming, and builds himself a nightmare dreamscape where he is trapped with nothing but his regrets.

That is all more or less straight forward. Sort of. But what exactly is reality? Where do Cobb’s dreams, or Murphy’s dreams, or Saito’s dreams end, and true reality begins? Your answer to these questions depends on your own personal viewpoint. Cinematical.com has a fascinating study of 6 different interpretations, but curiously it ignores my personal favorite, which I will elaborate here. If you want to read the other six, follow it here

My theory is thus: I take the movie at its word. That is to say, when Cobb decides something is reality (up until the very last scene) I agree that it is. They are in reality when they take the job from Wattanabe, and they are in the dreamscape once they plug in with Murphy on the plane. Maybe this is a simplistic viewing, but in my opinion it works just as well as the “it’s all a dream” argument. If you follow the movie by its own admissions, then the only question left is the ending.

Throughout the film, DiCaprio’s totem remains a visual link between reality and dreaming. The ending of the film is left intentionally ambiguous as to whether or not the totem is going to fall. With my theory, our interpretation of the ending tells us if we’re a pessimist or an optimist. Do you believe that Cobb escapes and gets back to his children, or do you believe he’s still trapped in limbo?

Personally, I think he’s in limbo. I’ve got some evidence. For one, his kids didn’t age, and they happen to be wearing the exact same thing they were in his memory. For another, how did his father even know to pick him up at the airport? Third, why exactly didn’t he age when Wattanabe did?

After reading the cinematical piece, I found myself buying the whole “it was all a dream” narrative far more than I did while watching the film. However… it kind of doesn’t matter. The point is the questioning. In film school, they made me watch a bunch of infuriating non-narrative films that were all about the experience and the subconscious. There was no logic to be followed in these films, no secret narrative to be uncovered. In a way, Inception is a non-narrative film wrapped in narrative, and uncoiling those layers is the process that gives the film meaning and eventually leads us to the catharsis that Nolan wants from us, regardless of our interpretation.