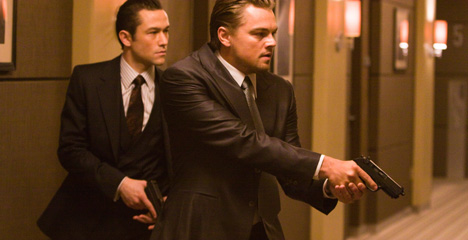 I think that in talking about Inception, you can do one of two things. First, you can analyze what the film means – what was Nolan saying, what does his world consist of, does it make sense? Second, you can actually talk about whether or not it was a good movie. I’m not saying the two parts are unrelated, nor am I arguing that one is more valid than the other. My point is merely that in a movie like Inception, I think the interpretation has less to do with whether or not it’s a film worth watching and praising and more to do with the fascination that lingers after the film is over.

As such, I plan on writing TWO articles about Inception, which may be self-indulgent of me, but I think is the most authentic way to talk about this challenging, fascinating film. As such, this article is not interested in the “What does it all mean?” questions, but rather the most basic question of film reviewing, namely, “Was it a good movie*?”

My answer to this question is an unequivocal yes. Leaving aside all questions of interpretation, tempting though it may be to indulge in them here, Christopher Nolan’s mind fuck of a film is still a masterpiece of epic proportions. The visual landscape alone, from the soaring metropolis’s that make up the filmmaker’s playground to the intimate dreamscapes, is cause for celebration. The artistry of the fight scenes, especially those starring the fantastic Joseph Gordon Levitt, is as revolutionary as any since (and we’ll talk about this A LOT more in my interpretation) The Matrix.

Leonardo diCaprio brings his usual controlled chaos to his role as the central figure navigating someone else’s subconscious. It’s a role he’s almost getting too comfortable in (as a huge fan of diCaprio, I don’t want him to get stuck into one rut so early into his career, no matter how meaty the rut), but you can’t deny that he’s great in it. As for the rest of the motley crew of dream-jumpers, Joseph Gordon Levitt and Tom Hardy stand out, not just for their inherent badassitude, but also for bringing some much needed levity to some of the film’s heavier moments.

The story is fascinating. Whatever your interpretation, you can’t say that Nolan makes boring films. For a man who’s films have grossed well over a billion dollars, there’s nothing superficial about Nolan. He’s asking big questions, and making bold cinematic statements. He challenges the typical notions of films, and has a visual artistry that is nothing short of profound.

Not to put it in too soaring and dramatic terms, because honestly I’m put off by all the “it’s the greatest movie ever” gushing, but Inception marks a high point in the career of a man who has seemed to have nothing but high points. It represents a culmination (I refuse to say “the culmination” because I’d like to think Nolan has a lot more to show us) of the journey that Nolan started in Memento, a journey he continued through both of his batman films as well as his smaller pictures like Insomnia and The Prestige.

This is a man deeply interested in exploring reality, both cinematic and actual. And Inception is a film obsessed with these metaphysical concepts, yet grounded enough in reality that it makes the whole thing gripping and fascinating.

*Please don’t conflate basic with simple. What makes a good movie is the basic question reviewers have been trying to figure out for years.