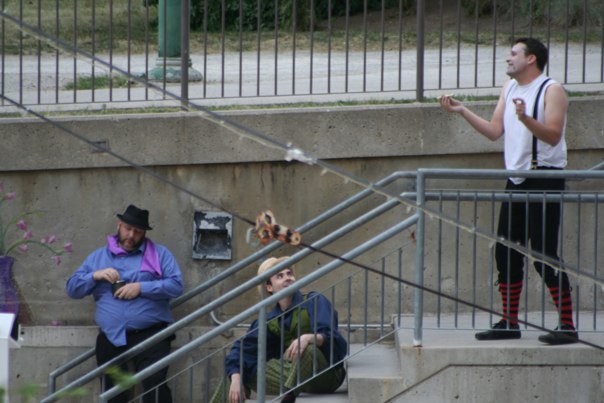 Urban Bard is unlike any company I’ve ever seen. It is exactly what its name suggests, urban bard, nothing more or less. This season’s contrasting productions of the uber popular Twelfth Night and the sadly obscure Two Noble Kinsmen are innovative to the point where I was literally giggling in delight at every scene change.

The set up of both plays (alternating performance nights throughout the run) is brilliant but somehow simple. Both productions begin at the giant fountain in College Park in Toronto. A slightly confused group of patrons gravitates towards 2 ushers passing around a donations box (pay what you can- the inclusive policy of the everyman theatre company). Some have brought picnics, others lawn chairs, they will soon realize that neither of these were a very good idea. When the play is set to begin, audience members take a seat around the edge of the fountain, or stand a little out of the way, unsure of where they should go. A dramatic splashing is heard, the audience snaps to attention and the production is off to the races.

In Twelfth Night (a remount of last year’s production) the play has been reordered so we begin with the captain’s rescue of Viola from drowning at sea. Doran Damon Okkema, a lively and surprisingly memorable captain, frantically trudges his way across the epic fountain, Lindsey Alston as Viola flung unceremoniously over his strong shoulder. Finally reaching the shore, he lays the unconscious Viola at the audience’s feet and urgently begins CPR. Coughing up water, a dazed Viola awakes and asks the production’s opening question: “what country is this?”. The captain has no sooner taken Viola to fetch a male disguise than Sebastian (Ned Petrie) and Antonio (Casey Hudecki) appear from a subterranean stairwell already mid conversation. The audience wheels around to observe the new scene before them (completely out of the original order) and the excitement builds as understanding dawns of what kind of production we’re now a part of.

After the initial scenes at the fountain (Kinsmen begins on the opposite shore with soldiers charging through the water to find the unconscious Arcite and Palamon ready for capture, a less effective but still enticing beginning), the audience is led through College Park by the ushers, now carrying large red flags to help shepherd the herd from scene to scene and serve as boundary lines not to be crossed.

Twelfth Night‘s audience descends immediately into the courtyard where the rest of the play is to take place, led by a most remarkable Feste (Christopher Mott) who’s “follow me”-ish song is the “food of love” music Orsino speaks of when we arrive at his palace. The fact that it seems palatial is one of the most remarkable things about Urban Bard’s approach. Orsino (Gordon Noel) is actually lazing about on a simple bench in a mostly concrete courtyard outside a mall. He has a couple attendants: Curio, Valentine, Viola (already planted as “Cesario”) and the captain (either cleverly playing the role of Viola’s confidant and co-conspirator or double cast as a palace guard, I’m choosing to believe it was intentionally the former, a distinctly interesting choice), but no other trappings of royalty furnish Orsino’s court. Noel, a giddy and oddly optimistic Orsino, sells the locale with his air of entitlement and comfort.

Helen Juvonen brings a similar decadence to Olivia’s home on the opposite side of the concrete expanse. A compellingly cold but sometimes irritatingly shrill Olivia, Juvonen’s best moment is her first entrance, descending a dramatic staircase into the courtyard dressed in full Eva Peron-ish mourning diva apparel. The entire production plays out in the various locations about the courtyard. Balconies, staircases, benches, picnic tables, flower beds, any and all possible uses of the single simple courtyard were taken advantage of in most ingenious ways. A particularly memorable sequence finds the audience gazing up at the second floor balcony of the College Park Mall to watch Sir Andrew (Tyler Seguin) and Viola’s pathetic fight only to have their attention diverted as a swashbuckling Antonio storms in at ground level, interrupting with a spectacular show of stage combat swordsmanship.

It’s as if the island of Illyria crash landed in central Toronto, paying no mind to the anachronisms of unavoidable modern interruptions. Cell phones sound, a group of stoners playing poker at a nearby picnic table laugh interruptingly, and at more than one point a toddler wonders sweetly into a scene, or an actor, or a set piece. But the play goes on, the actors adjusting, incorporating or improvising around the complications. Illyria disrupts Toronto about as much as Toronto disrupts Illyria. Startled passerby gawk at the strangely-dressed people speaking in iambic pentameter; chatting locals stare from their evening perches in the courtyard; the aforementioned stoners roll their eyes at the thespians intruding on their usually quiet poker space. But as the strangeness wears off, the courtyard’s regular inhabitants begin to settle in to watch the story play out. A wandering hippie joins the crowd, a pair of conservative Muslim families usher their kids over to the action, a casual drag queen meanders into the group and the stoners start to pay attention. By the time the players reach curtain call, their audience has more than doubled from the modest group that began with them at the fountain. It’s truly a remarkable thing to see.

Much of the play was remarkable in many ways. Both of them were really. From Twelfth Night‘s brilliantly blocked letter-reading scene to the single greatest Antonio I’ve ever encountered (absolutely hilarious- and female to boot!), the whole thing bled innovation. The wonderful Feste is at once a consummate performance artist, a playful buffoon, a wise man and a loyal bro. A strong willed and at times righteously angry Viola lacks the character’s beautiful melancholy but paired with a sympathetic Sebastian, the two actually seem like they could be mistaken for one another (a rare thing for most companies).

Two Noble Kinsmen uses a similar approach and is similarly triumphant. Taking advantage of a grate and nearby flower bed as the prison and the garden outside its window, Kinsmen spends more time above ground before descending into Twelfth Night‘s courtyard. Once there, it is used to similar effect, though somewhat more dependent on the balcony effect created by playing scenes on the ground level with the audience looking up.

The least-produced of all of Shakespeare’s works, Two Noble Kinsmen (co-written by John Fletcher) resonates interestingly in a modern context, something Urban Bard effectively brings to the forefront in their production. The story of Arcite and Palamon, as played by Erick Fournier and Christopher Sironi, is essentially that of a bromance and the girl who gets in the way (Tammy Everett). It is a wonderful story, based on Chaucer’s Canterbury Tales, that brought about tears and laughter from its audience.

The most (read: only) intriguing female part belongs to the remarkable Adrianna Prosser as the unnamed “jailer’s daughter”, the spiraling unrequited lover who owns the story’s subplot. The kingdom of Athens is held down by a forgettable Hippolyta (Tori Elliott) and a possibly miscast Theseus (Luke Marty, one of the youngest cast members taking on the singular authoritative role of the play). The ingenue role of Emilia belongs to Tammy Everett, who was significantly more successful here than as an overly self-congratulating Maria in Twelfth Night.

The key roles of Arcite and Palamon are captured proficiently but not spectacularly by Fournier and Sironi. Fournier, a disappointingly cowardly Tybalt in last year’s Canopy Theatre Romeo and Juliet, brings his remarkable stage combat skills to a less intimidating role and Sironi makes the remarkable jump from Twelfth Night‘s typically priggish Malvolio to a not-quite-dashing-enough-but-still-decently-dashing Palamon. The two able but flawed actors truly soar in their final moments together. The best friends’ final embrace before their duel is heartwrenching and Arcite’s final speech truly touching. Urban Bard’s capable cast made me fall in love with Two Noble Kinsmen in my very first experience with the play.

Ultimately, it’s director (and Urban Bard Artistic Director) Scott Moyle who should be credited for the remarkably unique experience of Urban Bard’s summer 2010 productions. His ingenious use of space, excellent sense of character and altogether clever direction is what sets these 2 productions apart from the masses of independently produced Shakespeare out there. The program for Twelfth Night and Two Noble Kinsmen says that Urban Bard was “born out of a love for the city of Toronto”. Nothing is more obvious in these productions than respect for the landscape they exist in. Urban Bard is a feature this Torontonian hopes never disappears from said landscape.