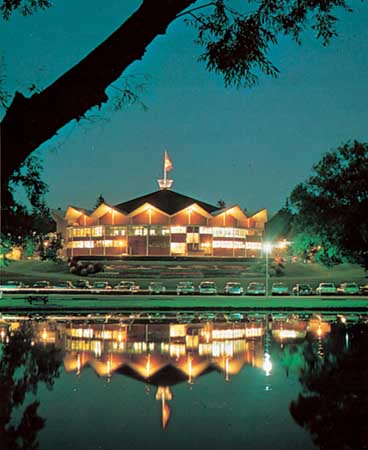 Next Season in Stratford

The Stratford Shakespeare Festival has just announced their 2011 roster. Here are the highlights (and lowlights):

Richard III: it’s a great play, fascinating really. But it is 99.9% dependent on a truly solid leading man. It needs someone who will bring something new to the part and keep the audience interested pretty much single handedly. So let’s talk innovation- Stratford’s handed the remarkable role to one of their greatest leading LADIES, Seana McKenna. I simply cannot wait to see what she does with it. I’m all for the festival opening up parts to women. Let’s cast based on who tackles it best, not on anatomy! Richard III will go up in the Tom Patterson Theatre, a perfect space for an innovative Richard.

The flagship production of the season will be the grossly over-performed Twelfth Night. It will be, as most predictably popular things seem to be, directed by Artistic Director Des McAnuff and will feature American film star (and Tony award winner) Brian Dennehy as Sir Toby. Stratford regular Stephen Ouimette will play Sir Andrew. Considering I associate the role with Michael Therriault circa 2001, Ouimette seems like an odd chronological choice but whatever. If I seem unexcited about this (PREDICTABLE) production, my boredom will be cured by the usually formulaic Malvolio. One of my absolute favourite Stratford performers, Tom Rooney, will be taking on the role and hopefully will bring his signature chameleon unpredictability with him. Another highlight is sure to be Ben Carlson as Feste. Carlson (an erstwhile blah Hamlet) is at his best in comedic parts and is sure to be a delight.

Rooney will also appear as Ford in The Merry Wives of Windsor at the festival theatre. Merry Wives, a nice obscure surprise opposite Twelfth Night, will be directed by Frank Galati, an import with impressive credentials. I’d like to take this moment to point out my frustration at all the importing of “names” instead of developing talent, but that is neither here nor there. The most exciting thing about Merry Wives is the casting of uber-talent Geraint Wyn Davies in the iconic role of Falstaff. Please let this be an early indication that maybe the festival will take on the Henriad soon! Wyn Davies would be superb as Falstaff throughout the entire canon (and don’t you think Prince Hal is a role Dion Johnstone is screamingly ready for? or maybe Gareth Potter, pushing beyond his supposed romantic lead limits?).

And speaking of pushing limits, the fourth Shakespeare slated for next season is the grotesquely challenging Titus Andronicus. Plagued with issues of race, rape and insurmountable violence, Titus can be sensational or sensationally bad. The press release contained absolutely no details on the production save for it’s location (The Tom Patterson, which will make for an eerily intimate experience), no director, no cast, no nothing. It’s truly the wild card of the season.

For musicals, first up is Jesus Christ Superstar. Despite it’s catchy and sometimes affecting writing, I’m pretty sure I will hate Jesus Christ Superstar at Stratford. Firstly, I barely made it through the monstrosity of Des McAnuff’s A Funny Thing Happened on the way to the Forum last season, which does not bode well for his musical direction style (yes, I know he’s won Tonys, but not for actually good musicals). Secondly, something has to be done about the Stratford musical casting. I cannot possibly be the only person not enchanted by Chilina Kennedy; I find her one-note, affected and blankly sweet. Maria was passable but far from the highlight of last season’s wonderful West Side Story so casting her right out of the gate as one of JCS‘s leads just seems like a mistake. Overall, this does not sound promising. Paul Nolan (last season’s Tony and a classical player this season as Orlando in As You Like It) held his own significantly better in West Side and may prove a surprisingly adept Jesus. Time will tell on this one.

The other musical planned for 2011 is in the exact opposite position. While JSC is a pretty good musical, Camelot is mediocre at best. But while the festival is attempting new territory (and bad casting) with JSC, Camelot already has a successful Stratford history. It was one of the first productions I ever saw at the festival and starred some of the biggest names (Cynthia Dale) and biggest talent (Michael Therriault) Stratford’s ever seen. Next year’s Camelot will star Geraint Wyn Davies, one of the finest performers currently working, who is sure to bring enough charisma to the role of King Arthur that the audience will give the libretto a free pass for its mediocrity.

Stratford vet Brian Bedford will once again take on the impractical task of directing himself, this time in The Misanthropeat the festival theatre. Hit and miss superstar Ben Carlson will play Alceste. The season will also see General Director Antoni Cimolino take on The Grapes of Wrath starring Chilina Kennedy and Janet Wright, and Jennifer Tarver’s interpretation of The Homecoming starring Brian Dennehy and Stephen Ouimette. The studio theatre will see Hosanna by French-Canadian playwright Michel Tremblay and a new play commissioned by the festival in 2008 called The Little Years (by John Mighton).

The festival also announced a new commission, a musical from Bob Martin, Don McKellar, Lisa Lamert and Greg Morrison (aka the Drowsy Chaperone people). May I point out that that is the kind of musical Stratford should be doing- small, original and Canadian. It’s not classical, but it is promising. We’ll see in a couple of years when it makes it to the stage.

Highlights (female Richard, great roles for Tom Rooney and Geraint Wyn Davies), Wildcards (Titus, an original play, the obscure Merry Wives in the hard-to-sell-out festival theatre) and Bad Ideas (Chilina Kennedy? Really?), next season at Stratford should be interesting.
Reviews of all 12 current Stratford productions will be posted throughout the summer.