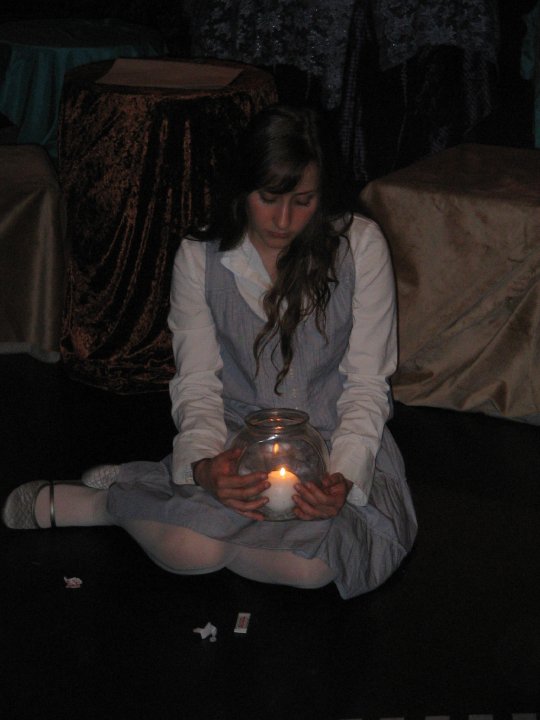 Perhaps the greatest thing about the production of The Glass Menagerie that I saw last week was the company behind the production. Cawrk Theatrical Productions, founded by Catherine Bernardi and Matthew Yipchuck, was invented as a creative outlet during the transitioning years while the young artistic directors left behind Cawthra Park Secondary School and moved on to study at York University (Cawthra+ York= Cawrk… get it?). The company, now 5 productions old, is a low-key testament to youthful initiative. All over the GTA young performers, directors and writers are scrounging for parts, for jobs, for creative outlets. They’re working their way up ladders, fetching coffee for the assistant to the assistant director and biding their time in the chorus. But these kids, they decided to work from the top of the company down, directing their own shows and casting as they saw fit. Now aren’t those the sort of people who’s work you want to watch?

And their work certainly proved worthy of such go-getter creative minds. Tennesee Williams’ The Glass Menagerie played June 2-5 at the Theatre Passe Muraille Backspace in Toronto’s super hip Queen West district. The space itself was lovely (an intimate blackbox with a brilliantly utilized side balcony) and suited the production perfectly. Director Matthew Yipchuck emphasized the “memory play” aspect of the piece, giving it surreal qualities to remind the audience that they are seeing the story not as it was but as poetic Tom Wingfield chooses to recall it. This proved incredibly effective both as an artistic choice and an innovative way for a young company to keep their costs down. The actors mimed the use of most props (including plates of food, doors and the glass animals in Laura’s titular menagerie). Costuming was simple yet suggestive. The lighting design by Shannon Fewster was inspired, beautifully augmenting the action and the directorial dream-like concept. Film clips and slideshow elements were projected to the back of the stage at designated points during the production. This choice sometimes distracted from the live action but also effectively emphasized Tom’s obsession with the movies and how that influenced his retelling of the tale.

Beautiful film-like score was provided at crucial moments by an omnipresent pianist (Tom Kerr) situated in the balcony and lit theatrically with a single red light. This was perhaps my favourite directorial choice of the production as it was incredibly effective in creating the ambiance of memory while adding to the action, never detracting. The use of space was impressive, using suggestive furniture and room partitions to allow flow from scene to scene without interruption. Overall, the direction was innovative and incredibly effective.

The actors were similarly successful, if not as consistent. As the key character of Laura Wingfield, Catherine Bernardi was charming, sometimes overly so. The handicapped and socially inept Laura was portrayed healthily and with great sympathy, a choice that bothered me at first but later grew on me. Jim’s lines tell the audience that Laura is far less crippled (physically and socially) than she considers herself and since the play exists in Tom’s memory it is possible that he would see his sister in her best possible incarnation, making Bernardi’s portrayal spot-on. The pathos inspired by Bernardi’s pretty, mournful eyes was remarkable, even when she was at times a little off kilter in the complexly layered role. The audience was fully on her side throughout, a great achievement with such a cloistered character.

In contrast, Josh Dolphin’s portrayal of storyteller Tom was not as charming as I would have liked. The weakest among a generally very strong cast, Dolphin held his own but lacked the ease of a seasoned narrator guiding the audience through his experiences. He forged a nice connection with Bernardi’s Laura but lost the audiences affections easily in Tom’s shiftier moments and generally struggled with enunciation, a debilitating flaw in even the most talented of performers. Ingrid Wirsig’s matriarch Amanda Wingfield suffered under a similar problem: a necessary but limiting southern accent. The southern belle’s drawl was well executed but so penetrating that it often drew attention away from the content of her speech. Hopscotching the line between affected and affecting, Wirsig soared splendidly at points and fell to caricature in others.

The cast member who most hit home with me was Eze Angius as Jim O’Connor. Angius lit up the stage as the all-too-recognizable fallen highschool hero. Jim’s incredible kindness to Laura rang truthfully and Angius’ chemistry with Bernardi was palpable. Playing the well-intentioned “gentleman caller” with dangerous charm, Angius raised our hopes and dashed our hearts right alongside Laura’s, making him the most striking actor in an easily under-appreciated role.

Cawrk Theatrical Productions can celebrate a great achievement in The Glass Menagerie. With innovative direction and a strong cast executing Tennessee Williams’ classic with precision and ease, the production was an overall success.