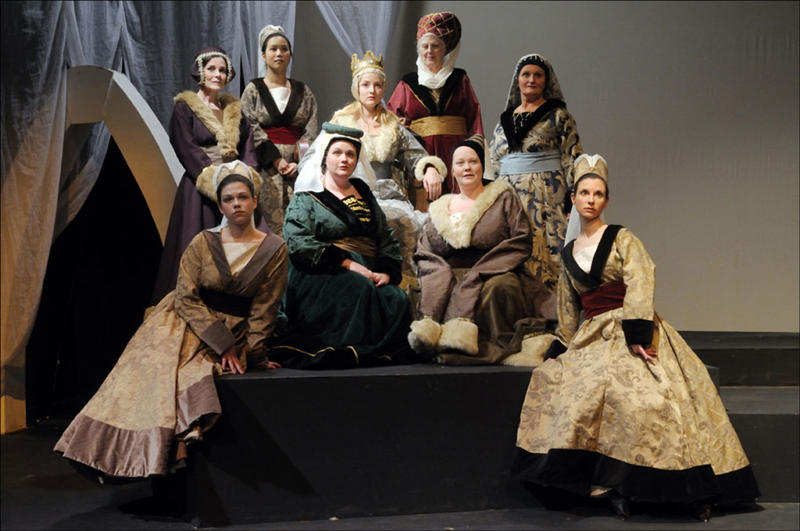 The Fantasy of The Queens

I must first admit that it took me a few days to gather my thoughts about Alumnae Theatre’s production of The Queens by Normand Chaurette, translated by Linda Gaboriau. Upon my return to Toronto after a year of participating in the Halifax theatre scene, I was very excited to get the opportunity to start my summer of great Torontonian theatre with the Alumnae Theatre Company. Yet I was admittedly a bit thrown by their production; which I see now is exactly the intention of this play.

As I walked very speedily (I was running a tad late) towards the theatre (a beautifully converted firehall on Berkeley Street) I was a bit apprehensive: I have never read Richard III (the Shakespeare play The Queens expounds upon) and I am not overly familiar with the War of the Roses of 15th century Britain. I was afraid the play would be lost on me because of my lack of historical knowledge of the period. Yet the production, I quickly learned, is not about history. Yes, all the characters are historical figures and the underlying conflict is accurate, but the play, I found, is much more of a fantastical exploration of the human relationship to power than a historically accurate depiction of events. Mat Howard puts it beautifully in his director’s note: “This is not Richard III – the Queens lurk in Shakespeare’s margins, but are not the same characters…Just as Shakespeare spun his elaborate fiction from history, Chaurette weaves his play from the threads of story Shakespeare left untended, creating a play that is utterly new and compelling.”

And how compelling it was! As the lights dim, the audience is hit with the power and tension of Rick Jones’s original score, sung by the three Chorus members (Danielle Capretti, Kat Lai and Kat Letwin), who were accompanied by a synthesized brass quartet. As a person who has studied Medieval and Renaissance music, I was shocked by the dissonance and unsettling feeling the music evoked; quite a departure from the feeling of traditional music of the period. But as the play began, I saw how necessary it was for Jones to compose a score with the same intensity and menace as Chaurette’s words. The Chorus sang Jones’s intricate and difficult harmonies beautifully, adding an invaluble element to the production. Heather Schibli’s costumes coupled with Jen Rovinelli’s makeup, hair and millinery design were stunning, which again added to the incredible production value of the show.

However, it was the acting that was most compelling for me as an audience member. As a stage manager, I am well aware of how little recognition the behind-the-scenes crew receives from an audience when compared to the amount of work and dedication they have put into a show. But without a good crew holding the technical aspects of a show together, action on stage cannot be affective for an audience. Thus I commend director Mat Howard, producer/assistant director Catherine Driscoll, assistant producer Christine Leung, stage manager Lynda Yearwood and all other members of the production team for enabling me to become so engrossed by the words and emotions of the actors.

The Queens boasts an impressive ensemble cast, composed of women ranging in age and experience but all brilliantly capable in their ability to present their characters. It was obvious in their on-stage interactions that these women have formed a strong bond as a cast, for which I congratulate them, as the evident respect for each other added a lot to the integrity of the show. The high degree of dimension in each character was also evident, especially in Meghan McNicol’s portrayal of Anne Warwick and Janice Tate’s Cecily, Duchess of York. Both women had exemplary expression and energy that permeated the audience. I was absolutely stunned by McNicol’s beautifully delivered openning monologue, which presented the perfect mixture of young naivete and cruel ambition, as well as set the tone of the play and a high level of expectation for the rest of the performance. Nonnie Griffin delivered well placed comic relief and palpable emotional turmoil as Queen Margaret and Elaine Lindo gained my utmost sympathy for her Queen Elizabeth. Jessica Moss, a fellow King’s Theatrical Society member, was both nervous energy and exploding passion as Isabel Warwick and when Patricia Hammond as the mute Anne Dexter spoke for the first time in act two, I was stunned by her ability to convey such raw, true human emotion.

When I left the threatre, I truly did not know if I had liked The Queens. It was not until I sat down to write this article did my feelings come to a head: I loved this play. And the fact that I have been thinking about it for two days straight proves to me that the play itself and the production put on by Alumnae Theatre are both fantastically compelling. Howard writes that “The Queens asks us to suspend our disbelief and trust in the magic of the theatre”, and the Alumnae Theatre Company’s production helped me to do just that.