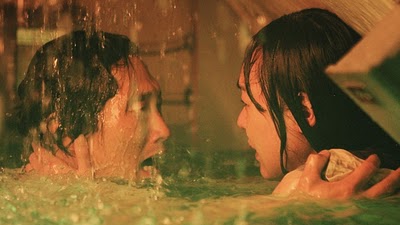 I just watched last night’s Lost, the episode entitled “The Candidate” and I know I want to write about it. But I can’t for the life of me think what I want to say. I mean,… wow.

You read this blog, you know I’m not a Lost fan the way most Lost fans are Lost fans. I’ve loved the show’s high points and resented its low ones but never really gave two hoots about it. I cried when Charlie died, I cheered when Hurley reconnected with Libby, I believe that Desmond and Jack will save these people in more ways than one. But I’m not sure Lost has ever left me speechless, at least not since Charlie, that one hurt.

But this week’s episode,… wow.

The ticking clock is showing on Lost like never before. They’re moving mythology left and right, pushing these characters at break neck speeds towards their fates. We’re caught up in two parrallel realities and for every triumph we can celebrate in one, tragedy lies in the other. I’m left not knowing quite how to feel. There is always a surviving version of oneself; the audience doesn’t know who to mourn. There’s redemption where we thought there could be none (Sayid); where we thought heroism had forever taken over, a spec of former destructive pride shows through (Sawyer); and when people come together in one reality, they turn their backs on each other in the next (Claire).

All I can say is this week’s episode toyed with my notions of mortality and network TV heroes in ways that Lost hasn’t since the unexpected demise of Boone and the tragically foretold death of Charlie. I saw performances this week from Terry O’Quinn, Daniel Day Kim, Matthew Fox and Yun Jin Kim the likes of which I’d never seen before. And for the first time in a long time I’m on the edge of my seat waiting to see what the man in black does next.