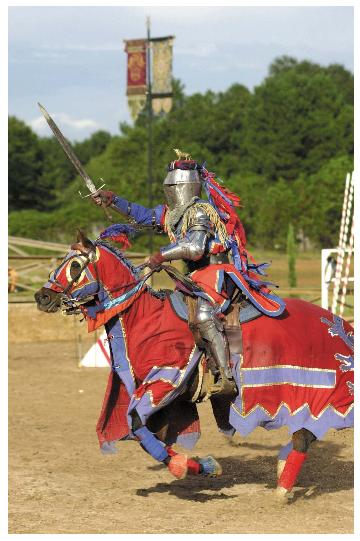 A Different Kind of Theatre

For those of us who worship Hugh Laurie for his portrayal of Dr. Gregory House, I’m sure no one even considered for a second missing last week’s episode. For those of you who don’t, I’ll explain.
Last week (not this past Monday, but the Monday before. I’ve been swamped with work) Dr. House treated a Renaissance Faire actor for a slew of problems, eventually diagnosing him with Anabolic Steroid use accelerated by being poisoned with Hemlock. When I saw the episode, I couldn’t believe it. Two of my great loves, Dr. House (hey, don’t judge) and Ren Faires brought together at last! Then it occurred to me: most people either don’t go to Faires or don’t respect them in the slightest.
Fine, I thought, people just suck. While that’s probably true (people DO suck), there’s also a lot of people who just don’t know what a Faire is all about. In fact, there’s plenty of theater people who don’t even realize that Ren Faires are as much legitimate theater as any production of Shakespeare.
What most people think about Renaissance Faires is that they’re populated entirely by geeks and/or nerds, or people who are just too insane for everyday life and prefer playing dress up. Well, I’m sure that’s true for some people (personally, I’m both a geek AND insane), but most of the actors at Faires are extremely professional performers. In fact, I myself once acted in a Renaissance Faire, The Connecticut Renaissance Faire to be precise. The people that I met doing the Faire were all phenomenally talented actors, many of whom had been or still were active in regular theater productions.
Faires themselves are really just extended runs of shows that happen in various stages throughout the day. The actors rehearse for months, learn blocking, lines, and choreography of all kinds, and by the time the show goes up, it’s a highly polished, professional production. In fact, the only real difference between Ren Faires and regular Theater is the effect that they’re trying to create. In Theater, the effect that is being created is that there is a story unfolding in front of you, and you get to sit and watch it. With Ren Faires, there is a story unfolding around you, and you get to walk through it, look at it from different angles, and be a part of it.
For me, Faire season in the north east is the highlight of my year. My season usually starts in June with the Silver Kingdom Renaissance Festival, has a brief jaunt over to King Richard’s Faire sometime during September, and ends with the Connecticut Renaissance Faire in October. Of course, that season changes all the time depending on whether or not I’m acting in a Faire (I am this year), and the fact that the Connecticut Faire is now holding two festivals, one in the spring and one in autumn (I’m going to both).
I’ve been going to Faires ever since my family took me to one in middle school and said “Jim, I think we found your people.” I usually go with a group of my friends, anywhere between two people and ten, depending on how many we managed to rope into coming with us. Faires are a great way to get out, enjoy the weather on a beautiful day, dress up in funny clothes, and get to be someone that you aren’t for a while. And hell, it’s always great to step outside your comfort zone every once in a while, so why not do it somewhere where not only is it perfectly alright to carry a sword around, but where you feel slightly under-dressed without one?
For more information about the Faires I mentioned above, feel free to check out these links:
Silver Kingdom Renaissance Festival- http://www.kingdomfestival.com/
A Festival running two weeks in the middle of June.
The Connecticut Renaissance Faire- http://ctfaire.com/
A Faire which runs two festivals, one in May and one in October
King Richard’s Faire- http://kingrichardsfaire.net/
A large Faire running August through October