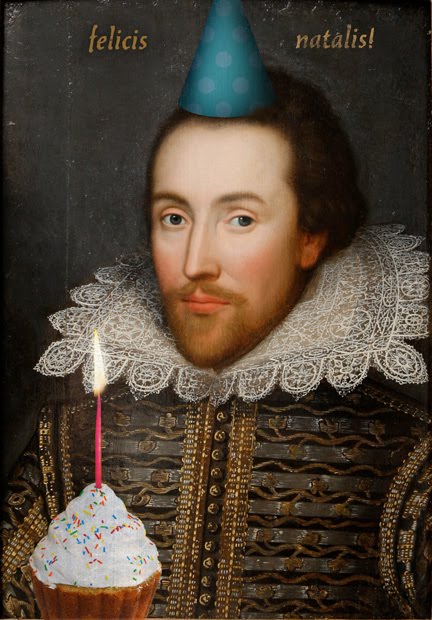 In honour of this most prestigious of days, I offer you a list of my 15 favourites from the illustrious 38.

15) Titus Andronicus: my good friends the Calliope Players recently tackled this troublesome piece with dignity and artistry, thus redefining it for me.

14) Othello:though plagued with the least sympathetic hero ever, this story finds redemption in well-played Desdemonas and Emilias and the knowledge that it is “Othello’s tragedy, but Iago’s play”.

13) Henry 4th part 1: prince Hal just might be the most human of all history play characters. I’ve met many a prince Hal in my time and liked them all. Add a little Hotspur and a lot of Falstaff and you’ve got yourself a mighty fine play.

12) A Midsummer Night’s Dream: the Athenian lovers never fail to entertain and when played correctly the fairy court can be incredibly moving. This play is also open to great artistic interpretation. But that act five, I never quite can get over how stupid it is.

11) Twelfth Night: this beautifully melancholy, outrageously funny piece is weighed down only by the annoying fact of its convenient twin plotline. As the first Shakespeare play I ever studied and the first professional production I ever saw (The Stratford Shakespeare Festival, 2001), Twelfth Night will always hold a special place in my heart.

10) Hamlet: some brilliant themes, complex characters and classic lines make this the most famous thing in the world. A reason to like it I’m sure but also the reason I tend to think it’s both brilliant and overrated. Especially hard to play because of the hero’s wordiness, Hamlet is a rare Shakespeare that I believe works better on the page than the stage.

9) The Tempest: there’s an ethereal magic about The Tempest that draws me in every time. The 2005 production that I saw in Stratford, ON was the great William Hutt’s last role, something I will forever be grateful that I witnessed.

8) Much Ado About Nothing: there are few things I love more than banter. I also like smart people, strong people and fiercely loyal people. Much Ado‘s got all that. A delightful film version with the two actors born to play Beatrice and Benedick (Emma Thompson and Kenneth Branagh) doesn’t hurt.

7) Julius Caesar: last season’s Stratford production was my first true introduction to this remarkable piece and it is not one I will soon forget.

6) Merchant of Venice: I firmly believe that this is a tragedy not a comedy and that Shakespeare intended it to be so. I firmly believe that if Shylock’s forced conversion at the end was intended to be taken lightly, Shakespeare never would have let him speak such humanizing lines as “if you prick us do we not bleed?”. The incredible humanity that exists in these characters is unparalleled, it is a rare and remarkable glimpse of characters who live completely in the grey area between hero and villain.

5) Richard III: a favourite of college professors, Richard III exists on my bookshelf in at least 7 different volumes. And each time I study it I’m taken even further aback by its complexity. As a piece of Tudor propoganda, as historical fiction, as a humanizing character study, as a guide to oratory and poetic device, Richard III works.

4) Romeo & Juliet: over-exposure and belittling interpretation has made this play mockable, but in it the unpretentious examiner will find some of the greatest love poetry ever written, characters so unique that actors flock to them even if they only speak 30 lines or appear in the first 2 acts, and a human story of extreme beauty and folly.

3) Macbeth: my love of Macbeth most likely stems from a highschool production, to this day one of the best I’ve ever been a part of. But the captivating spiral of darkness, the terrifying allure of the main antiheroes and the intense watchability of this piece keeps me on my toes every time I see it.

2) As You Like It: the only Shakespeare with a true heroine at its core, As You Like It is an ode to the non-ingenue young woman. Liberated from the court that ties down so many other Shakespearean characters, those in As You Like It are free to frolic gaily in the woods and fall madly in love at a moment’s notice. They banter sweetly, are not punished for pretention or simplicity and live in a world where one can write poetry on trees and break spontaneously into song. Depth and profundity live in a pretty pastoral box that brings the audience happiness against all odds.

1) King Lear: so much to say, so little space. Perhaps one day I will expound upon this, the greatest play I have ever known.