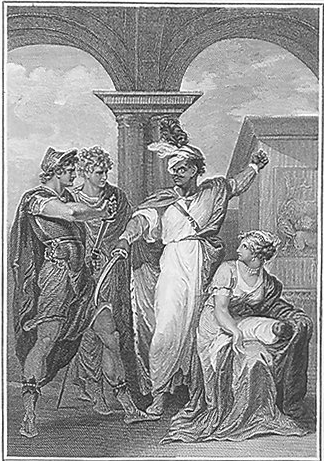 The Diary of an On-Stage Rapist

So, we’re two days into a run of a play that we’ve been working on for the better part of the last five months. Now, that’s a long time, considering that the last play I was in went up in thee months. Anywho, we just put up William Shakespeare’s Titus Andronicus, and I have only three words to describe it.

The play itself is a really heavy piece. Add to that the intense staging that our directors came up with and it gets to the point of ridiculous. People break down and cry. And in the middle of it all is something that my character, Demetrius, did.

Demetrius is a rapist.

Not only that, but he’s also a murderer and a mutilator, and a psychopath. He is, pound by pound, the worst character that I have ever played. He is just plain evil. And my god, it was amazing. I’ve never played a character that was so anathema to myself, and I’ve played some strange parts over the years.

So, this was a particularly difficult part for me to play. I mean, I like to think that I’m a pretty good guy, for the most part at least; so playing someone who was so clearly NOT a good guy was a real challenge for me. I’d go so far as to say that the hardest part of acting is two fold. On the one hand, you have to be completely aware that you are not portraying yourself when you step out on stage, because you’re an actor, and that’s what you do. On the other hand, in order to do it well, you have to internalize what your character would be feeling given whatever blocking or lines are happening on stage, and you have to become the character for the two or three hours that you are up on stage. That’s what sets actors apart from other people—anyone can get up on a stage and recite lines, but only an actor can make the audience believe that they are saying those words for the first time, ever. Yes, I did in fact happen to steal that particular bit of wisdom from a TV show, but that doesn’t make it any less true. That was my greatest challenge with the role—coming as close as possible to becoming the character, without crossing the line into being something that I couldn’t stand.

The ability to do that came from this simple fact: Demetrius isn’t actually the bad guy of the play. He isn’t as he seems, just evil to the core, but he becomes what he is because of what he’s had to go through. He was forced to watch as his older brother (or sister, as in our production) was dragged off by Romans to have his (her) limbs hacked off and be set on fire, as a sacrifice for Roman soldiers killed in a war with the Goths. That is what pushes him past the point of no return, and he is aimed toward what he actually does by Aaron, the only character in the play who is truly evil.

Of course, that isn’t even to say that the Goths are ultimately the evil side of the play. The simple fact of the matter is that there are no “good guys” in Titus Andronicus. Even the titular character, Titus, who is cast throughout the play as the long suffering hero of Rome that is beset by enemies, is actually a bad guy. In act 5, scene 2, he has the two sons of his enemy, Tamora (one of which is Demetrius) bound, and he explains to them how he plans to kill them, butcher them, grind their bones to paste, and make two pies out of them which will be fed to their mother as an act of vengeance for what has happened to his family. That is not the act of a good guy. The good guy would simply kill the two brothers in vengeance, rather than effectively torturing. The closest thing that Titus has to a “good guy” is Lavinia, the victim of the rape, but even she isn’t so much a “good guy” as she simply is a “victim”.

So, I guess what I’m saying here is that the way that I managed to play this horrible, terrible human being, and sell the role at all without completely falling apart is that I was able, on some level, to humanize him. In one way or another, all characters are real people, with real reasons for doing what they do, especially in Shakespeare’s works. By finding those reasons, I was able to connect with my character on a personal level, and internalize the terrible things he was doing, because I was able to understand the reasons for his actions.

And that, ladies and gentlemen, is how I played Demetrius, the rapist, and managed to keep my soul intact.