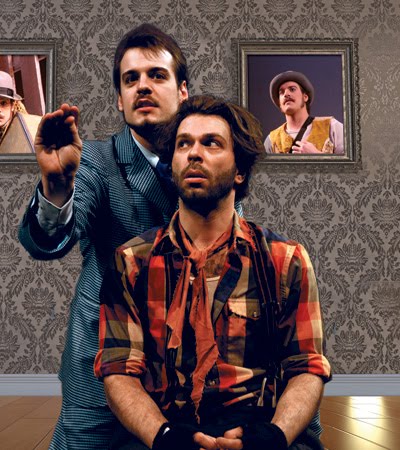 My Theatre is thrilled to introduce its newest author, James Melo. A Shakespeare buff and general theatre-lover, James has a bone to pick with one of the Bard’s lesser-known comedies.
“I to the world am like a drop of water
That in the ocean seeks another drop,”
or
Why William Shakespeare’s Comedy of Errors is a Terrible Play

Ok, so let me just go ahead and get this out of the way right at the start. I LOVE William Shakespeare. In my opinion, he is the single greatest author to ever grace the English language, and his equal has never been seen nor will ever be seen. If I had a time machine, I would go back in time, meet him in a pub, strike up a friendship, and see where it went from there.

That being said, Comedy of Errors is just an absolutely horrible play.

I was fortunate enough to see a performance of it by the Connecticut Repertory Theatre Troupe recently, and it was actually pretty good. I say pretty good, and not excellent, because the play itself has so many issues.
First of all, the entire premise is absurd. The whole thing only works if the most unlikely set of circumstances occur. Admittedly, very few of Shakespeare’s works are actually “likely”, but Comedy of Errors pushes it just far enough to make it beyond ridiculous. For those of you who are not familiar with the plot of Comedy of Errors, it boils down to this: there were these two people, a man and a woman, who loved each other very much. They had children, twin boys, and as luck would have it, someone else in their town had twin boys as well, so they bought the other twins to be servants to their twins. Now, this isn’t so absurd just yet. But here’s the kicker: apparently, these wonderful parents couldn’t think of more than two names. So, they called both of their sons Antipholus, and both of the servant twins Dromio. Would those who see the problem with this please raise their hands? No? Still a few who don’t see it? Ok, fine…

As though fate (or a hackneyed plot device) had preordained it, the two sets of twins are separated (along with the mother and father), so each Antipholus gets a Dromio, and they are sent on their merry ways. Years later, one Antipholus (Antipholus of Syracuse) and his Dromio, not knowing that they are actually twins, ends up being mistaken as the other Antipholus (and other Dromio) by everyone that the other set knows, including the other Antipholus’s wife, sister in law, and business acquaintances. The two Antipholi (yeah, I wanted to call them that since the beginning of the article) manage not to meet until the final scene, where everything is explained by their father (who just happens to be the prisoner of the Duke of Syracuse) and their mother (who happens to be a nun in Syracuse who one of the Antipholi sought sanctuary with). And so, everyone lives happily ever after, blah blah blah.

Now, I’m not saying that I didn’t enjoy myself. I’ve never not enjoyed myself at the theatre. This particular play is funny, but only because some of the jokes are clever and the director is given a LOT of leeway by the text for entertaining bits of blocking. In other words, I enjoyed the play not because the play itself was good, but because the director did a great job of bringing the whole thing together.

Even with its absolutely ridiculous premise, Comedy of Errors is actually sort of funny. The problem is, though, that if you strip out the mistaken identity bit, there’s nothing all that funny going on in the text itself.
The play is only funny based on something that makes absolutely no sense, which sort of puts a damper on the play itself being funny. So, I’m going to have to say that although I admittedly enjoyed the staging of it that I saw, it is not even close to making my list of my top 10 favorite plays that William Shakespeare wrote.
And I swear to whatever god you want to make me swear to, if I EVER have twin sons, I’m naming one Bob, and the other Greg.