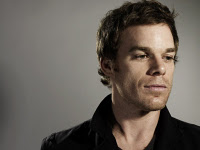 Michael C Hall, star of Dexter and Six Feet Under and simply the best television actor of his generation, recently announced that he has Hodgkin’s lymphoma.

Hall, 38, is receiving treatment for the cancer, which was caught early and is very treatable. Word is he is currently in remission and is expected to be alright. (Just in time for the Golden Globes tomorrow, where he had better win for best actor in a television drama).

Our thoughts are with you Michael, please be ok.