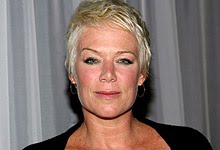 First we lost Shane Sparks, then Wade Robson cut back to a routine or two a year, now the choreographer universally acknowledged to be a genius, Mia Michaels, is also leaving So You Think You Can Dance. The creator of countless memorable contemporary pieces and very few mediocre ones, Mia was the highlight of almost every show. With Adam Shankman as the permanent third judge, we knew we’d be getting a little less Mia this year but I was holding out hope that that meant more of her choreography in place of her harsh but fair judging. But no, it means no Mia at all. Nigel apparently has left the door open for her to return whenever she likes though, so I imagine there’ll be maybe one or two “very special Mia Michaels routines” per season. And she only specifically announced that she was resigning from the American show, maybe Canada will still be graced with her presence from time to time: hey, we can dream.
Read all about it by clicking here.

As a final tribute to the fan-favourite, here are My TV’s favourite Mia routines: