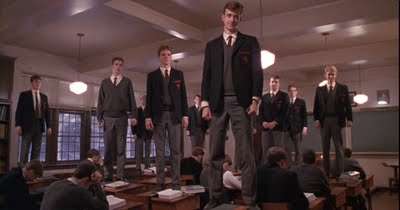 Tonight’s How I Met Your Mother paid tribute to the great coming of age movie Dead Poets Society. With Barney’s gesture of standing on his desk and addressing Ted as “captain my captain”, How I Met Your Mother made up for the merciless (and hilarious) mocking that the same film had endured on Thursday. Last week’s Community also referenced the classic movie, but rather than paying homage to its charms, it mocked its absurdities, to great effect. The impracticality of ripping up textbooks, the danger in standing on a desk and the sheer pointlessness of the phrase “seize the day” all became clear as Joel McHale and Co. took a class with a teacher who was “convinced he’s in Dead Poets Society” and assigned homework like the task of telling 10 people you love them. With references in two of the funniest shows on TV, this decades old film is clearly making a comeback, as an inspirational tale and a campy icon worthy of satire.