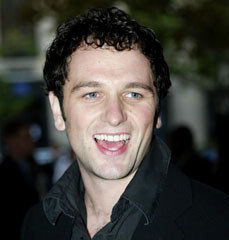 Since Brothers & Sisters‘ first season back in 2006, Matthew Rhys has been one of my favourite people on television. His complicated and endearing character Kevin Walker has also been a favourite, as well as one half of TV’s best couple: Kevin and Scotty. The 34-year-old masks an accent and tackles English as a second language (his first is Welsh) to play Kevin and manages to steal every scene that he’s in; this week was no exception as his scene with Kitty was the most affecting I’ve seen in quite some time.

Though most of his film credits have gone unseen by the My TV team, Rhys’ work in Julie Taymor’s controversial 1999 interpretation of Shakespeare’s Titus was startling when Tim and I first saw the film a couple weeks ago. Once we realized that we were watching our beloved kind-hearted Kevin in the despicable role of Demetrius (who, alongside his brother Chiron, played by Jonathan Rhys Meyers, rapes and mames Titus’ daughter Lavinia), it took us awhile to adjust to seeing Rhys in such a different character (not to mention sporting a different accent and bleach blond hair). But Rhys’ performance is undeniably good, a highlight of the star-studded film and one of the more memorable pieces of character acting I’ve ever seen.

So with a solid line of credits, international appeal and one of TV’s most engaging characters as a day job, the only question that remains is: where is this guy’s Emmy?