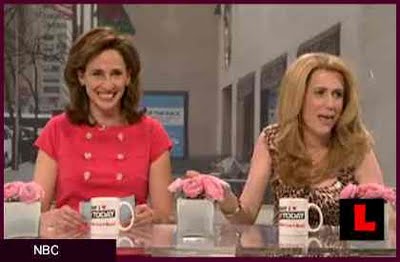 Just when we thought that Kirsten Wiig (SNL‘s only woman with full castmember status since Amy Poehler’s departure) was getting a little backup (go-to straight girl Casey Wilson was paying her dues and newcomers Michaela Watkins and Abby Elliot were showing lots of promise with hilarious characters and dead on impressions), Saturday Night Live showrunner Lorne Michaels gave the axe to 2 of the 3 female featured players.

Michaela Watkins, easily the most promising of the non-Wiig women, was consistently a highlight of the show and won’t be appearing this coming season. She was particularly great when paired with Wiig in their Today Show sketch, which featured Watkins’ pitch-perfect Hoda Kotb impression opposite Wiig’s zany Cathy Lee Griffin. She was Elphaba in Neil Patrick Harris’ Broadway sketch, played Glenn Close, Julia Louis Dreyfus, Uma Thurman and the all-important Barbara Walters in “The View” (one of my favourite recurring group impression sketches). Apparently Lorne Michaels told Watkins that she deserves her own show. I’m just saying, I don’t know why that’s a good reason to fire someone, but I would totally watch that show.

The other funny lady to bite the SNL dust this week was Casey Wilson. A 2 season featured player, Wilson was best known for filling out scenes as the reliable “straight woman” opposite the crazy characters played by Wiig and Poehler. But with impeccable impressions of Jennifer Aniston, Rachael Ray, Ginnifer Goodwin and Elizabeth Taylor, Wilson shone.

Two replacement castmembers have been announced to take the place of Watkins and Wilson (in an an already heavily male cast) but one has to wonder: if SNL keeps replacing their women, will anyone ever have the chance to step up and take on the men of SNL like funny ladies Gilda Radner, Cheri Oteri, Ana Gasteyer, Molly Shannon, Tina Fey and Amy Poehler did in the past?