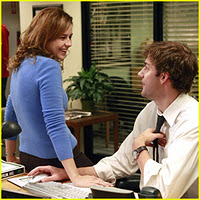 The Office
Sometimes, The Office is just so pitch-perfect that it shocks me. Tonight’s premier episode comfortably, brilliantly straddled the line between Michael’s awkward neediness, Jim and Pam’s happiness, and the rest of the cast’s quirks in a way that at once re-introduced us to our friends at Dunder Mifflin and made us wonder how we survive all summer without them. It wasn’t a particularly huge episode (although it did include some surprising character growth amongst all the irreverence), nor was it the most quotable, but it took a well-worn Office trope (Michael’s ridiculousness causes chaos, he tries to fix things, makes things worse. The office, specifically Jim and Pam, have to step in and fix things) and did it so well that I am feeling more confident than ever that this show can succesfully carry through on all the promises it has given out over the years.
I love how far The US Office has come from its UK cousin. Don’t get me wrong, I loved Ricky Gervais’ masterpiece way before Michael Scott was even a gleem in some tv producer’s eye, but I like that our Office as its own flavor. It’s not afraid of happiness. It started as a caustic workplace satire, but really, now it’s a celebration of the tiny happiness of the average american. It’s way too good natured to really be considered a satire, although it has satirical elements, and it’s way too funny to just be schmaltz. But at the end of the day, this is a show that chose to end last season with two people with whom we’ve grown to love over five seasons more deliriously happy than I think we’ve ever seen a couple on television. And then they started this season with a witty, funny episode that deconstructed Michael Scott’s neurosis without the malice that occasionally creeps into that discussion. It’s a truly unique creation, and the best argument for The Colonies rebelling from their British Overlords since all that tea got dumped into the Boston Bay.

Community
After watching the previews for Community, I’m not sure I was ready for the angry, mysanthropic Joel McHale character of “Jeff.” I had expected something more “wacky and good natured” than “college-faking and cheating.” That being said, despite my surprise at its tone, I think I’m grooving at its promise, for a pilot.
I love Aved (the Arab, previously Sanjay on Greek ), who talks crazy fast and says things like “this is getting more like the breakfast club” and then does the Bender monologue with hilariously gleeful perfection, and who may or may not have aspbergers (although what great television protagonist doesn’t, Sheldon?). John Oliver as the befuddled, morally-compromised, some-times-drunk-driving dean is all lovely British dry wit. And the surprise in the bunch is Britta, the love-interest for McHale, who is shockingly well realized and witty and cool in her own right. Or, as McHale’s Jeff puts it, “how was I supposed to know you’d turn out to be smart and cool? You look like Elizabeth Shue.”
The strength or weakness of this show will rest on how well integrated McHale’s bullshit (which he does brilliantly) is with the rest of the show, and how much they make us believe in the man beneath it all. McHale is amazing to watch, and he’s funny, and I’m only sort of distracted by how overly styled his hair is. The show is leaning in the right direction, but basing a show around a not-so-nice main character is always a tricky proposition, and I hope they can continue to get the balance right. You have to let the amoral dick that is at the center of your show grow and breathe without losing what makes the show funny to begin with.
And damn if this show doesn’t have some quotable dialogue:
“As if there’s a dinner on Earth that could make me forget you are a shallow douche bag.”
“We are the only species on Earth that observes Shark Week.”
“Do you think astronauts go to the moon because they hate oxygen? No. They’re trying to impress their highschool prom kings.”
“If it’s so serious, why don’t they call it meningitis?”
And never before has a show so succintly summed up my life and current woes: “The funny thing about being smart is that you can get through most of life without ever having to do any work. So I don’t really know how to do that…”