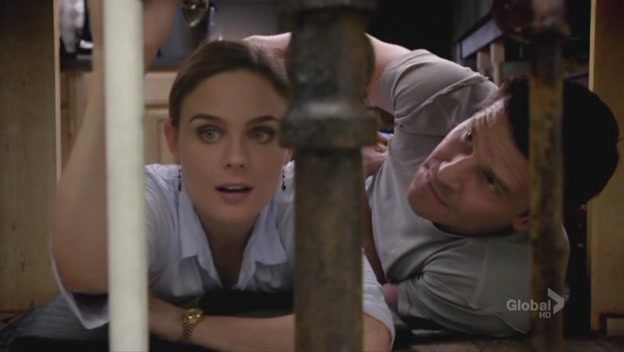 You have no idea how relieved I am to be typing this: I REALLY enjoyed tonight’s Bones.
Don’t get me wrong, it was by no means a perfect episode (the 007-ness was a bit hoaky for me), but it made me happy. The final Booth/Brennan scene almost made up for all of the push and pull of the coma, hallucinations, amnesia absurdity. I love the quiet sweetness of Booth and Brennan, which is why I found all the melodrama of last week’s episode annoying.
But Brennan, putting her natural snobbishness aside in order to let Booth teach her plumbing, and then sharing such an intensly intimate yet true to both of them moment trying to fix Booth’s plumbing… well… that’s the perfect amount of relationship drama.
And although in the beginning I thought the 007 thing was DOA, it turned out pretty twisty turny and interesting, with a few classic-Bones gross out skeletons along the way. And I’ve always liked Wendell, the intern of the week, and I like what he brought out in all the rest of our cast. I also liked that there was a legitimate storyline for the rest of the cast that didn’t involve commenting wrily on Booth and Brennan’s feeble steps towards relationshipville.
I still don’t like that the show feels the need to hit us over the head with B&B (example: the CIA girlfriend, “I guess it’s not like the FBI. We’re not just allowed to sleep with eachother.” Brennan, “Is she talking about us?” Yes, Brennan, she, just like every other guest star for the past 18 episodes is picking up on the fact that you and Booth are in a relationship, even if you aren’t), nor that they sometimes are more obsessed with goofy music breaks and commercial friendly one liners than with true character development. And the commercials with David Boreanaz and Emily Deschanel all cuddly annoy the crap out of me.
But this was a well written episode, with very true, moving character moments, and that was something I sorely needed for all my patience with the show.