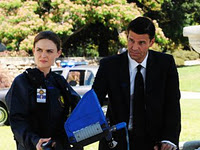 I wish I could say that the Bones premier erased all my doubts about that damn finale. I really wanted it to. I feel like all I do of late is hate on this show, which is sad, because it’s probably the show that I am the most invested in.
I think my number one problem with this show can be referred to as Moonlighting syndrome. Maybe you don’t remember the tv show moonlight, but chances are if you’re a big enough tv dork to read this site you’ve at least heard of it. Moonlighting was an 80s tv show starring Bruce Willis and Cybil Shephard about detectives, and it was very much so based on the sparkling chemistry and will-they-or-wont they of its leads. When they finally did, the steam let out and the show fizzled.
Maybe you don’t remember Moonlighting, but the people who work at Bones sure do. The problem is, the past two seasons I feel like they haven’t been very good, or very convincing, at keeping their leads apart. That’s why the finale frustrated me so much. And the whole “what if Booth loving Brennan is just a coma side effect” thing feels forced. Anyone who has been around the two of them for the past five seasons knows exactly what Booth’s feelings for Brennan are and vice versa. So it felt untrue to me that Sweets of all people (who spent so much of last season realizing the depth of the duo’s feelings for each other) would try and dissuade Booth with the argument that he doesn’t really love Brennan, it’s just a coma side-effect. Much more convincing was Cam’s acceptance of it, but caution to Booth to think about how world-rocking making a move would be.
I just wish I felt like the show had a master plan, or a sense of where all of this is going. It seems like they’re just content to drag out the relationship, and lack the plotting skills and the confidence to actually let them change their dynamic. They so subtly and brilliantly built to this moment, right here, in season five, where Booth has no choice but to acknowledge, out loud, that he is in love with Brennan, that to see all of that growth thrown away for a hokey clown metaphor was frustrating.
I guess that’s why I find Bones blatant commercialism and poor over-arching plotting so annoying; there’s so much on this show that is well done and smart, that it seems like an insult to all I’ve bought into when things just feel so contrived. The last ten minutes of this week’s Bones legitimately made me snort because they seemed so hokey.
I can accept that Booth and Brennan aren’t going to get together for awhile, but then I want to see them doing what they do best, verbally sparring and solving cases, not have to sit through endless metaphorical scenes about Booth’s feelings and Brennan’s vulnerability. I don’t want to have to watch Cyndi Lauper (no matter how brilliant a cameo, given Brennan’s penchant for the singer) explain for what feels like the four thousandth time how the pair are “intertwined.” Lauper basically played the part of omniscient narrator, whose psychic powers giving her license to spell out the plot to those of us not subtle enough to pick up on all the anvil sized clues. I know all this. Stop telling me. Go back to showing me.
None the less, I still love Bones. It’s still a cast of fine, talented actors, who have such good chemistry one’s tempted to forget how manipulative it all is. And the murders of the week are normally much more intriguing than this week’s lame psychic, cult ridiculousness, especially because they normally have more heft than as a device to talk about the relationships. This isn’t Grey’s Anatomy. The cases are supposed to try, test and prod our heroes, but not in this straight forward a manner.

So that’s my Bones rant, and I hope that future reviews will be tempered with more love than vitriol.