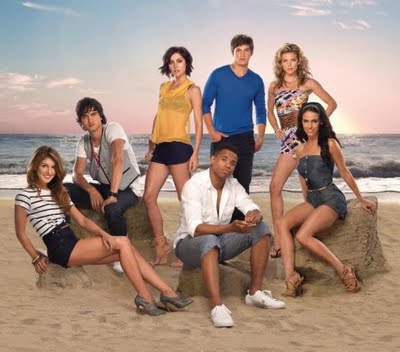 This makeover has brought us new characters and revamped old ones. Let’s discuss the revamped old characters, because I really enjoy what the writers of the show are doing with Naomi, Adrianna, and Liam.

Naomi, she’s supposed to be the bitch of the town. We aren’t meant to really sympathize with her; but I do. I mean, she has no parents that really care about her; her sister is crazy; and she has the worst luck. Sure, she is aggressive; but she has to be. She has to fend for herself. Sure, she just sent out a mass text that included a naked picture of Annie—but this is understandable when you consider her older sister who manipulates everyone at every turn. Besides all of the aggression, Naomi is a stand up character. She protects her friends, i.e. Silver. She keeps her stride despite all of the people around her who manipulate her into doing what they want. And she’ s hilarious; can’t beat that.

I also love Adrianna. Her character has undergone several revisions, and each subsequent revision is better than the last. When we first met her in Season 1, she was a druggie theatre girl. As that season progressed, she went through rehab, softened up, got pregnant, and realized she wanted to be a ‘normal’ teenage girl (when have any of these girls on this show been ‘normal’?). This season, she still has some healing to do after giving her baby up for adoption; she has the typical jealous boyfriend (the always adorable, if tedious Navid); and she’s still desperately trying to be normal. I love how level headed she is thus far. However, I hope her need for normalcy doesn’t detract from her story arc or her personality. Adrianna is fun, sweet, and caring. She definitely balances out Naomi, which is why they work as best friends. I hope she and Navid are able to work through their differences because they are a cute couple. A little unrealistic for high school, but when is anything realistic on 90210?

As for Liam, his character is a tad predictable. Can we say Ryan Atwood from The O.C.? The outsider who has anger issues who tries to fit into this new environment. Despite this, I can’t wait for him to take down Jen, Naomi’s sister. Yes, he was dumb to sleep with her, but Jen, if anything, is quite persuasive with her words (and her looks). Liam knows he did wrong and is desperately trying to fix his mistake. Hopefully, the Naomi-forgiving-Liam-storyline does not take too long because that means Jen will be around way longer than I think the audience can put up with her. Back to Liam: he also has to overcome the roadblocks put in place by his stepdad. His stepdad is a complete tool who, at moments notice, is ready to kick Liam back to some form of boot camp. Lastly, I can’t wait to see the development of the Liam-Dixon-Teddy trio.

Speaking of Teddy, he’s not my favorite. First of all, he looks way too old to be in high school. Secondly, he’s cocky—I’m not into the cocky characters. I don’t really care that he was the first guy that Adrianna had sex with; that only means that Adrianna and Navid are going to fight now. Big deal. Thirdly, he is an instigator. The fact that he didn’t recognize that in the first episode is absurd. He doesn’t realize, thus far, how his actions affect others. My opinion is not completely formed, but definitely starting to take shape.

Even with the 90210 makeover, there are still some characters that I could care less about. ANNIE!! She complains about almost everything. And now that she is in this self pity bout, aka ‘bad’ Annie, she is even more annoying. She is angry, but all she does to show this is cry. She, for one reason or another, is incapable of using her words to communicate her feelings. I want someone to shake her and tell her to grow a personality. I just can’t sympathize with her. Who cares, Annie? The world does not revolve around you and your issues. I’m just saying.

The second character who becomes more and more irritating is Ryan. All I have to say about him is that it is his fault for the eventual burn he is going to receive from Jen. How can he be so dense? Also, he needs a haircut.

Makeover or no makeover, I still have mad love for Dixon and Silver. Together or not together, these two characters are solid.

All and all, I think this season will be stronger than the first. The characters seem to have more direction and purpose and I can foresee some interesting twists and turns. Plus, the lives of these characters are so absurdly outrageous that I have to love it.