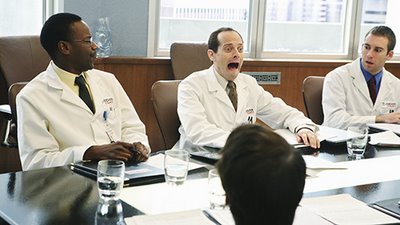 Season Wrap Up: Better Off Ted

Usually when I have high expectations nothing can ever meet them. Yet somehow, Better off Ted never disappoints me, and it certainly didn’t with tonight’s season 1 finale.

The world of Veridian Dynamics is a ridiculous fun-house mirror reflection of our own ridiculous world. From kooky scientist Phil and his deadpan counterpoint Lem to the adorable and well-intentioned rebel Linda (played by Andrea Anders, an old TV favourite of mine), the cast of characters is consistently funny and engaging.
As charismatic and competitive leading man Ted, Jay Harrington does a complete 180 from his horrible role as Dr. Lockhart on Private Practice. In the hands of lesser writers, Harrington seemed weasel-y, pompous and unengaging. So imagine my surprise when he turns out to be none of those things when given material like that coming from creator Victor Fresco and his team (which includes writers of such underrated gems as Aliens in America, Samantha Who, Less than Perfect and It’s Always Sunny in Philadelphia). As the fourth wall-breaking anchor of the show, Ted is the perfect mix of sanity and quirk.

Predictably, however, the highlight of the show is stern and ironic boss Veronica (played to perfection by the incomparable Portia de Rossi). In interviews, the down-to-earth Aussie seems shy, sweet and private. But given an extreme character (like Veronica or her unforgettable role as Lindsay in Arrested Development) de Rossi shines. I’m sorry Tina Fey, but I think you may have some competition for “funniest woman on TV”.

Other highlights include Ted’s hilariously mature daughter Rose (I know that doesn’t sound very funny, but trust me, it is, in the finale she’s grounded from the internet for having bought a boat online), the absurd dialogue (“another time, another place, two other people: it could have been magniflorious”) and the strange, delightful and ironically socially relevant stunts “the company” pulls: like freezing Phil, developing pumpkin weapons, growing meat and decorating the cubicles of the office “drones” in one of four designated themes (cats, space, the green bay packers and cars). The latter causes absurd office cliques while the new security system they install causes problems when it doesn’t acknowledge black people. The Veridian Dynamics ads near the top of each episode are always hilarious and wrap up the satirical themes of every episode in a neat little package that eerily resembles most actual TV ads.
If you didn’t watch this show, I suggest you make that right before their unexpected second season begins, because with TV this smart it’s always just a matter of time before it gets taken away from us.

FINALE GRADE: A
SEASON GRADE: A+