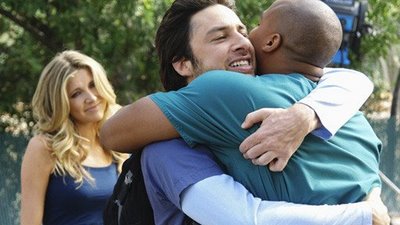 The series finale of the Scrubs we know aired on May 6th but I just got around to watching it tonight. I say “the Scrubs we know” because the show will technically be returning in the fall but executive producer Bill Lawrence has urged viewers to see the new season as a different entity altogether. Featuring only a few members of the current cast (the most notable absence being lead actor and narrator Zach Braff), the new chapter of Scrubs will abandon it’s home hospital in favour of a med school setting. So, in more ways than one, the finale I saw tonight was the end of Scrubs, in its current incarnation.
The episode (a two parter entitled “My Finale”) was a perfect series ending (in keeping with the great finale formula that I talked about in “The OC in My Opinion” and “Spin City: in memory of Mike”, both available in the Featured Posts section). It celebrated JD’s last day at Sacred Heart before he moves to another hospital to be closer to his son Sam.

Each character got their curtain call moment: including a funny and character appropriate goodbye from the Janitor, a touching moment between JD and Carla, a small but nice goodbye for Dr. Kelso, a sweet but perhaps a little scripty pro-JD rant from Dr. Cox (his hurtful rant at the end of part 1 was more affecting in my opinion), appropriately undramatic farewells from Elliot and Turk (who are the two character that were the most prominently rooted in JD’s life outside the hospital) and a beautiful reappearance by many of the 8 season series’ most memorable guest stars in a fantasy sequence very true to the show’s fantastical tone.
The final sequence in which JD imagines his future the way he wants it to be was really quite touching if you looked at it the right way. It would be easy to write off the scene (in which JD watches his future on a makeshift movie screen) as cheesy and dumb, but a real fan of the show will recognize it as a perfect JD moment. As a character he’s always been cheesy and day-dreamy, and thus the show has been too. In the character’s final moment, what’s more appropriate than embracing those very qualities and giving the audience a feeling of hope in a happy ending for the character (an ending where he marries Elliot, they have a baby, he gets together with Turk’s family and Dr. Cox’s family for Christmas and finally gets his hug, and Sam Dorian and Izzie Turk get engaged, making JD and Turk family finally).
The ending was sweet, paying tribute to the 8 seasons that came before and sending off the leaving characters in the right direction.
Now it’s time to get excited for next season’s Scrubs 2.0: Med School, (clearly not the actual title).