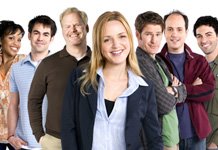 I Want Their Life

My Boys is easily one of my favorite shows, ever! After every episode, I confess I want to be part of these fictional characters lives. I want to be immersed in this show. But I don’t admire one character more than the others; in fact, I want to live like all of them, in some way or other:

Kenny: He’s not attractive like Bobby or Brendan. He doesn’t have a typical ‘cool’ job like PJ or a high power job like Andy. He’s not ‘loud’ like Mike. Or wear fancy clothes and drink wine like Stephanie. But, he is great. I want his job. He makes money off of something he LOVES! He owns his own store of sports memorabilia. How awesome is that? It’s pretty damn awesome. And, although he is not a go-to favorite, his humor shines through the crowd. He balances out Mike’s ridiculousness and highlights it at the same time. Like all the characters, he has his spot in the group, and it’s perfect. I wouldn’t mind being Kenny.

Mike: Now, just imagine a red-headed Matthew McConaughey….Have it? Well, now you have Mike–Or that is what Mike would like you to think in Season Two’s opening episode. I wouldn’t want to be Mike because he is always spot on with his humor but because he isn’t afraid to make a fool of himself…I respect that because, let’s face it, we’re all fools sometimes. I even find Mike’s simplistic apartment charming. He sees nothing wrong with owning a single recliner, a TV, and a couple other items. It’s his life and he doesn’t apologize for it. Being Mike (for a day maximum) seems like fun!

Andy: The lawyer, who’s the family man…who doesn’t seem like a family man. I think the reason I wouldn’t mind being Andy is because he is the brother of the coolest TV character! I also admire him for being able to chillax with his friends, drink beer, and play poker while still being a decent husband and dad. He doesn’t think he is too good to go to therapy when he and Meredith need help, which is another respectable quality. Andy is a fun guy and he brings a quality to the group that one is never too old to hang out and have fun!

Brendan: He’s the official cool guy. His daily wardrobe consists of jeans and a t-shirt with the logo of some band on it. Despite his rocky relationship with Wendy, he has a pretty charmed life. He went from being a DJ radio host to unemployed to an owner of a club. How sweet is that? While unemployed, he didn’t even have to live uncomfortably because his best friend housed him. See, Brendan is awesome because of his best friend, which is why I want his life: so I can be friends with PJ!

Bobby: His family is uber rich; his family is slightly crazy; and still, his life is grand. At first, Bobby is the new guy of the group, but after two episodes he no longer bares that title. He manages to find humor in Mike’s awful jokes. He doesn’t mind Kenny’s social awkwardness. He totally fits as the second cool guy of the group. He gets along with everyone effortlessly. He just fits. When he’s absent from poker night, something is missing. Bobby is charming. After finally seeing the folly of his ways with his almost-bride-to-be, Elsa, he and PJ finally find the groove in their romantic relationship. Bobby is a chill guy. A chill guy whose life rocks! A life I wouldn’t mind trying.

Stephanie: As unrealistic as her life is, it still seems pretty awesome. When we first meet her, she is a writer for a magazine, yet she’s in loads of debt. After a trip to Italy and focusing her attention on writing a book, she’s a ‘love guru.’ A love guru who is no longer in debt. That sounds like fun to me. Stephanie hosts wine socials and invites all of her girly friends and PJ. She is able to balance both worlds of the ultra girl and the relaxed way of life that PJ defines. She fits in well with the group at Crowley’s (even though she complains about being in a bar) and she fits in well at pricey wine bars. Like Brendan, she is best friends with PJ, which again is another huge factor of why I wouldn’t mind being Stephanie. Besides, she has great taste in wine.

PJ: This girl defines awesomeness. She’s a sport’s writer. She loves beer. She knows her away around a poker game. Most importantly, she has the best group of friends and life. Sure, she has her men problems–well, that is, until Bobby. Stephanie doesn’t think she is girly enough, but PJ doesn’t care. PJ loves being a down-to-earth guy’s girl who drinks scotch. My life goal is to be PJ: to have a job I love, to be able to claim a bar as my joint, and to play a weekly game of poker with the boys. Her life is amazing. AMAZING!

Please forgive the overuse of the word awesome and synonyms for awesome. You see, I think the characters of My Boys have such interesting and cool lives. Each person lives a life that suits them and I don’t think I could choose which life I would want to live more.How do you choose between awesome and awesome?