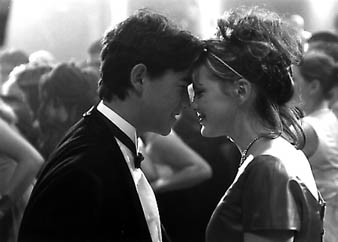 The super talented and artistically-minded Gordon-Levitt started out his career at the tender age of 7 with a guest stint on Family Ties. He then established himself as a child star and transitioned seamlessly into a teenage leading man, spending 6 seasons on the beloved sitcom 3rd Rock in the process. After an acting hiatus that saw him studying French at Columbia University, Gordon-Levitt’s artistic tastes led him down the independent film road. Now, with his lovable performance in the sweet yet purposely un-sentimental indie 500 Days of Summer, he is reemerging as an audience favourite.

Gordon-Levitt can next be seen in a completely different role for him: in a big blockbuster action film. He plays Cobra Commander in the upcoming GI Joe: The Rise of Cobra (out in August).

(500 Days of Summer kudos also to Zoey Deschanel for brilliantly conquering a very tricky role, to screenwriters Scott Neustadter and Michael H. Webber for a lovely and fresh story that was quirky but not annoyingly-so, and to director Marc Webb for brilliant visuals, great pacing and the casting of lovely TV ladies Rachel Boston and Minka Kelly. See this movie- it’s lovely).