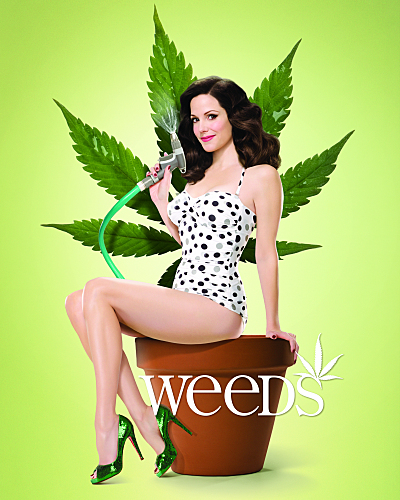 As a show, Weeds has always kind of existed within its own little airtight moral vacuum. Sure, we, as the audience, could, like Nancy, often justify her early decisions, but as more time passed, Nancy’s behaviour grew more and more erratic and motivated by fear and selfishness. For most of the show, Conrad remained the moral heart of the program, but after Agrestic went up in flames along with Nancy’s grow business at the end of Season Three, so too, apparently, went Conrad, who hasn’t been seen on the show since.

Season four, then, left us without my personal favorite character, sans one annoyingly catchy theme song, and in a whole new, beachy place. It should have sucked. But it might have been the best season yet. After last season, with the husband-killing, DEA-defrauding, UTURN-inspired craziness, I did not think Nancy (not to mention Silas, who last season started banging an Olsen twin, and Shane, who started talking to his dead father) could sink any lower. And then she tumbled through the metaphorical rabbit hole around the same time she allowed a Mexican drug kingpin to build a tunnel in the back of her store.

Celia, meanwhile, ended season three betraying Nancy happily to the police, spent the first third of this season in jail, the second third in a drug-induced haze, the last third in rehab, and the last episode being kidnapped by her own Kaitlyn-Cooper-esque daughter. She finally came to some sort of a… reconciliation is to strong a word, but what the hell, with her daughter and had a final shoutout with the ex-hubby. And all along she remained the Celia we’ve grown to know and love: unpredictable, endlessly selfish and mean, and yet the biggest survivor of them all.

It tied in particularly well with Silas’s mythical 18th birthday, which provided much of the framing for the ultimate episode. After mommy dearest has to abandon her son to go see the drug impresario who may or may not be about to kill her for betraying him to the DEA, she leaves him a tear filled message via gift basket that simply, and beautifully, sums up Silas’s character arch up until this point in the show: “Thank you for raising yourself. You did a good job.”

Which brings us to Nancy. Oh Nancy. She of the 1,001 and bad decisions. It’s telling that on a show that features immigrant-running, Oedipus complexes, and cocaine addiction, Nancy’s still the one making the worst decisions. So first she teams up with Guillermo, the Puerto Rican gangster who burnt down Agrestic, and starts running drugs for him. But she’s no good at that, because, well, she’s Nancy and she acts like a crazy person under pressure and she dresses like a hooker, so she tends to stand out. Then she becomes the face of a maternity clothing store, which she knows is a front for something, but all she can concentrate on is the boring mundaneity of having to work a normal job. That’s right, Miss I-do-this-all-for-my-family misses dealing drugs. Whatever. Then one day she discovers a big gaping hole in the back of the store, and, Alice-like, has to follow it. To Mexico. But Mexico isn’t all drug-running, arms-dealing, and girl-selling. It also is home to Esteban, the charismatic mayor of Tijuana, who starts a relationship with Nancy by spanking her in his limousine and ends the season ready to kill her for betraying him.

I think Nancy could be the only protagonist in television history who I despise and yet don’t hate. Characters you “love to hate” are one thing (Wilhelmina Season One, The Mayor, etc., Mary Cherry), and characters you just plain hate (Dawn Summers, The Duchess, Connor), but I truly despise so much of what Nancy does and stands for – I think she’s a pretty despicable human being who messes up nearly everything she touches- and yet… Maybe it’s because Weeds is such a gleefully amoral show, but I care what happens to Nancy, and I root for her to get out of these mountains of shit despite the fact that the mountains are entirely of her own design.

But even if this weren’t true, Nancy the character showed tremendous, surprising, and ultimately redeeming growth in this finale. Because Nancy reached her breaking point. All of the drug dealing, all of the moral compromises, all of the millions of ways she’s let down her kids, all of it becomes to much for her in one iconic image: a scared, so-young girl being brought out of the tunnel by Guillermo, clearly for slavery/prostitution/nothing good. And it spurs Nancy in to stupid, possibly suicidal action. The scenes leading up to this are nothing short of brilliant, and they focus on one of my favorite relationship in the show: Andy and Nancy.

Which brings me to my final point. Andy. On the surface, Andy provides comedic relief. He’s the pot smoking, goofbag, do-nothing uncle who mooches off Nancy and teaches Shane how to masturbate without clogging up the toilets. But Andy is actually one of the most moral characters on the show, and his endless devotion to the kids provides the few touching moments. And he’s sincere to a fault; stoned and ridiculous, yes, but sincere. When he says he wants to save Mexicans by bringing them into the US, sure he’s doing it for money and for glory, but he at least believes all his own “El Andy” bullshit. And when he sadly looks down at naked pictures of Nancy hidden in Shane’s room, you can really see his heart breaking for the kid.

In the last episode, Doug, still upset that Andy banged (one slash two times) his long-lost-Mexican love Maria, drops what he considers some insight onto Andy: you’re in love with Nancy. Andy denies it. And denies it again. And then, finally, stops to consider it. Then he sees Nancy naked, and she confesses all her sins to him.

The show doesn’t take a firm stand on whether or not Andy loves Nancy (I mean, you could easily argue “yes” but it wouldn’t be too difficult to shy away from it either), but ends with him curling up into the fetal position with a pillow at the mere idea of it. AND LET ME STOP YOU RIGHT HERE, WEEDS. Please don’t do this to me. I really, really, really love Andy and Nancy’s relationship. I love the strange, dysfunctional, brother/sister vibe they have going, I like the innocent flirting, I like the way that against the odds they’re coparenting two very messed up kids together. And Nancy… well, if Conrad’s any indication, once she sleeps with a character I love, they’re off the show. Not only would Nancy and Andy sex ruin the show, watching Andy mope about Nancy would just annoy me. Bring back the scary Israeli chick! Or Zooey Deschanel! Anything but that. PLEASE. You thought George and Izzie was bad on Grey’s Anatomy? This would be one thousand times worse. (on a side note, why is it that Jeffery Dean Morgan’s death seems to cause this sort of mayhem in television characters?)

With the exception of potential Andy and Nancy ickiness, I loved this season finale. As is Weeds stock in trade, it left all the characters on a precipice of ridiculousness, although this one seemed less dire than in the past. Nancy is banking on her pre-natal status to save her from Esteban’s revenge, Shane’s dealing drugs to his 13 year old cohorts, Silas and Andy are going in on mexican land together, Celia is being held for ransom by her daughter, and Doug… performed autoerotic asphyxiation on himself. All is well in Renmar.

FINALE GRADE: A-
SEASON GRADE: A-

Weeds comes back on the air in two weeks on June 16th on Showtime. And apparently Allanis Morrissett is set to guest star on it.