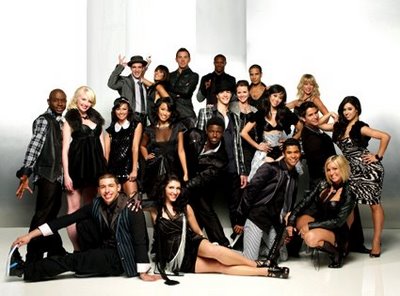 To steal a line from the infamous Mary Murphy: “AHHHHHHHHHHHHH”!!!

Last season saw some remarkable talent hit the So You Think You Can Dance stage. It boasted some of the most memorable routines of the series (“Bleeding Love”, the bed routine, “The Garden”), some great personalities (Twitch, Mark) and some impressive technique  (Katee, Josh, Chelsea). And the season before that was my favourite of all time, featuring an unparalleled technician and character story in Danny Tidwell, some other incredibly talented and fun competitors (Sabra, Neil) and some brilliant choreography (the business meeting). This fall, on the Canadian edition of the show, I really liked more members of the top 20 than ever before.But I’ve never seen anything like I saw tonight.Season 5’s first top 20 show blew my mind. Every single dance was good. Actually, with only 2 exceptions, they were all fantastic. This new group of charming, vibrant, empathetic and absurdly talented dancers tackled everything from a trademark lyrical hip hop from Tabitha and Napoleon to a technically outrageous Bollywood number to an exquisite foxtrot to a sizzling samba, with unbelievable panache.And, for the first time ever, I really really like every single one of them. Of the many dancers that I didn’t know going into tonight (the producers of SYTYCD are notably lacking, I’d just like to get that opinion out there), all but 2 of them really managed to make a positive first impression. My early favourites (Evan, Phil, Caitlin, Jason, Asuka, Janette, Kupuno and Melissa) all impressed with their performances. And even those I wasn’t so sure about (Kayla, Randi and Brandon) won me over tonight.As for the only disappointments of the night (not even really big disappointments, just not extraordinary accomplishments like everything else), I’d same the blame lays partly with the choreographers and partly with the producers (the latter of which are not really up to snuff as a general rule). There’s been a pattern over the years that every time a choreographer is tasked with creating more than one routine for the week, one will be brilliant and the other a let-down.

This proved true again this week. Super-couple Tabitha and Napoleon created yet another show-stopping hip hop routine but then followed it up with one that was just OK. Then the multi-talented Tyce Diorio stepped in to create a Broadway number and a Jazz one. True to the pattern, the jazz piece was extraordinary (possibly my favourite of the night) while the Broadway routine was the unfortunate low-point of the evening. In both cases (particularly Broadway), the dancers in the routines were great, it was the routines themselves that lacked oomph. And since one mediocre routine can mean the end for a talented dancer in this competition (especially this early on), I think it’s only fair that choreographers just be asked for one routine a week, they’re at their best that way.The only routine that I thought was missing something from the dancers themselves was the cha-cha by Jonathan and Karla. Both unknown to the audience before tonight (let me reiterate, these producers suck) the two danced the routine well (not the most enthralling routine, I’ll grant you, but not terrible) but lacked the sizzle that I’ve come to expect from the Latin dances. If you’re working without the story or character that the other dance styles provide, you’ve got to really bring the sizzle. The evening’s high points were Evan and Randi’s surprisingly hot jazz routine (possibly Tyce Diorio’s best creation ever), Ade and Melissa’s touching Mandy Moore contemporary (to “Right Here Waiting”, the same song as my favourite routine from season 1), Phillip and Jeanine’s Tabitha and Napoleon hip hop squabble (I’m a sucker for any Tab & Nap lyrical piece) and a special (read: strange/delightful) Wade Robson jazz routine performed to perfection by the unexpectedly amazing duo of Kupuno and Ashley (who were the most engaging crash test dummies ever in this demanding yet oddly peaceful dance).

In other news, it was great to make it back to the main stage for the real competition part of the show. I was happy to have Cat back as more than just a voice-over girl. I was impressed with Nigel’s comment to Brandon about his feet, it was the first time I’ve ever heard the boy criticized by anyone other than those with random and unclear grudges against him. Mary needs to bring the volume down, she’s a smart lady but she sounds like an idiot. And, in a complete 180, I am now an Adam Shankman fan. Now that he has proven himself with some solid judging, cut back a bit on the self-promotion and the long-winded comments and brought the fun by spontaneously swing dancing with an auditioner, I’m on the Shankman bandwagon this year (and will be seeing Step Up 3D, if only to see Katee, Josh, Ivan and Twitch).If they keep on like this, So You Think You Can Dance’s 5th season promises to be their best ever… by a long shot.