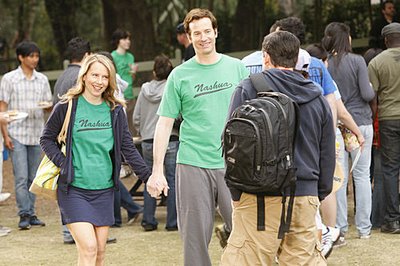 Season Wrap Up: The Office

The best way to describe the 5th season of The Officewould be bittersweet. Everything from the season premiere that saw Jim coping with life in a Pam-less Scranton to the Superbowl episode in which overly cruel employees roast Michael to the finale that left Jim and Pam wordlessly celebrating life-changing news while Michael looked optimistically to the romance in his future; the whole season was a mix between sweetness and sadness, comedy and heartbreak.

An above average season for The Office, in my opinion, season 5 was when Michael finally began to grow up. After throwing her a baby shower, Michael finally was able to let toxic Jan go and embrace a new character who brought out the best in him: Holly Flax. Whether they were rapping, flirting or performing “Slumdunder Mifflinaire” at the company picnic, Michael and Holly were the perfect complement to each other; she was the exact right combination that matched Michael’s zaniness but also grounded him. And when they were torn apart and she moved on, Michael didn’t make with the crazy as you might expect, rather he saw things with his newfound maturity and declared his and Holly’s “a long [love] story” that just hadn’t reached it’s ending yet.

This season also saw major growth professionally for both Michael and Pam. Michael saw some success when he was asked to go on a lecture circuit, teaching sales techniques to other branches. But, under-appreciated and under-respected, he finally reached his breaking point with the company when they cancelled his anniversary celebration. So, the series was tossed upside down for the first time since it’s premiere 5 years ago, Michael started a competing paper company, taking Pam and Ryan with him. And though the storyline only lasted a couple episodes, it was a serious game changer for Michael, caused Dwight to reveal his true loyalties and moved Pam forward in the quest for self-fulfillment that she began 2 years ago at that infamous bonfire.

Pam started the year out of the office. Her and Jim proved the strength of their relationship by going long distance for awhile while Pam went to art school in New York. In a somewhat lame move, however, Pam moved back to Scranton, seemingly giving up on her artistic aspirations. But she picked up new aspirations. As the only employee to walk out of the office by Michael’s side, Pam demanded a sales position in his new venture, The Michael Scott Paper Company. And when the company merged back in with Dunder Mifflin, Pam carved out a space for herself on the sales team. She may not have moved as far as she wanted to go, but Pam finally got herself out of the receptionist chair she was so bored with.

This is also the season that proved that Jim and Pam (as Rachael would say) are not Ross and Rachel but rather Chandler and Monica. Though it took them awhile to get together, this season proved that Jim and Pam aren’t going anywhere, at least not without each other. Surviving the long distance thing, and Pam’s multiple foray’s into the world outside Dunder Mifflin, Jim and Pam grew even closer this year. They finally got engaged, Jim bought his parents’ old house for them to live in and, in the final moments of the finale, they found out that Pam is pregnant (they’re ecstatic about it, by the way). And in the episode when the couple was on the rocks because of Pam’s parents’ divorce, she summed up their relationship perfectly with the words: “When you’re a kid you assume that your parents are soul mates. My kids are going to be right about that”.

As for the other main romance in the show, season 5 was a tumultuous one for Angela. She went from engaged (to Andy) with a bit of action on the side (with her secret true love Dwight) to single, hated and alienated. But the finale saw Andy healing and moving on, his attention caught by the new receptionist. We also got a little tease of a reconciliation between Angela and Dwight. Jim and Pam might have proved to be Chandler and Monica but Angela and Dwight have all the epic earmarks of a bizarro world Ross and Rachel.

Filled with little delights like Phyllis’ auctioned-off hug and Pam’s secret volleyball skills; plagued with cringe-worthy things like the intervention for Meredith, the baby shower for Jan and Ryan’s frosted tips; and packed with heartbreaking and heartwarming moments in between, The Office’s 5th season isn’t one to miss, though I wouldn’t go into it expecting a barrel of laughs without a couple of tears.

FINALE GRADE: A-
SEASON GRADE: B+