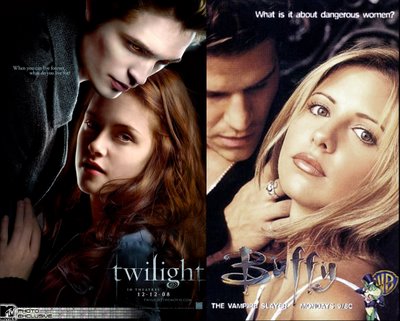 For a long time, I’ve wanted to do a side by side match up of BtVS and the Twilight series (it’s pretty obvious from reading the books that Stephanie Meyer, their author, was heavily influenced by heaping helpings of classic WB shows like BtVS and Roswell, but its extra-specially influenced by the Buff) and it looks like someone on these here Internets beat me to it. This thing is racing like wildfire around the Internet, as semi snobby BtVS fans can show the way that the show really helped to put a stake in the anti-feminist tropes many see as inherent in the Twilight series. For the record, I don’t go quite that far (check out MY MOVIE REVIEW for more details), but I did like watching the straight talking badass that is Buffy give Edward Cullen an earful and (eventually) a stake-full for all his creepy, smelling-you-iness. Even if I felt like the whole feminist argument behind this (basically that Buffy is better than Bella) could easily be argued the other way if we used more Angel evidence instead of the over reliance on Spike scenes, I really enjoyed this match up. Mostly, it’s just funny.