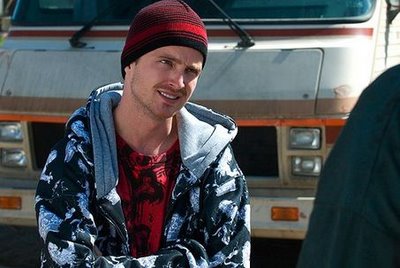 Easily my favourite thing about AMC’s edgy and critically adored series Breaking Bad, Aaron Paul as scruffy drug dealer Jesse Pinkman is a study in detailed character acting. Everything from his ever-roving bloodshot eyes to his restless hands to his frantic speech patterns make Jesse come to life as the palpably conflicted and complicated character that he is.
But what’s interesting about Jesse, Paul’s most revered role to date, is that the actor so disappears into him that he is never recognized as that character. Paul says that while walking down the street, if he’s noticed at all, he’s recognized for his other (and much less lauded) current TV role, as Scott on Big Love.
The well-kept and low key actor much more closely resembles Sarah Henrikson (Amanda Seyfried)’s sweet and conservative fiancee than the bumbling meth head he plays so convincingly on Breaking Bad.
On Big Love, Paul plays the unexpectedly controversial Scott with amazing subtlety. It’s hard to believe that one actor can embody two such opposite characters so effectively, but Paul does it with finesse, making both the intense Mormon and the misguided druggie into incredibly relatable and lovable characters. Starring opposite the incandescent Amanda Seyfried on Big Love and the famously genius Bryan Cranston on Breaking Bad, Aaron Paul somehow manages to steal both shows on a regular basis.

It’s impressive to play one multi-faceted TV character with praise-worthy brilliance, it’s absurd to play two at once.