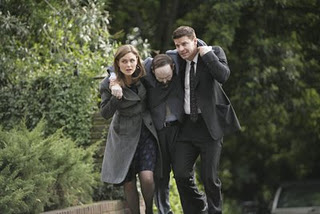 Does no one respect the delicate beauty of the television schedule anymore?

At first, it was hard to believe the episode was even real. Add to that the fact that this week’s episode featured Brennan, Camille, and Booth stealing the body of a colleague from a wake and Weekend at Bernie’s-ing around town with him, and you’ll forgive me if the whole episode had an air of dreamyness to it (maybe “I did acid in high school. That’s probably why I’m not a doctor.”). “The Double Death of the Dearly Departed” could be the best goofy episode in Bones history, in that the goofiness seemed authentic rather than absurdity for the sake of absurdity.

Random Greatness:
* Brennan and Booth singing, but especially Booth, because everytime he sings it reminds me of Angel’s awful karaoke’ing skills.
* Brennan attempting to mime sex to Booth by having her hands do the wave.
* The Weekend at Bernie‘s reference with the sunglasses.
* Everything having anything to do with the poor undertaker and Camille’s indentification with him.
* Booth flirting his way through the lawyer
* “Hank’s greatest passion. Aside from sex.”
* Booth knowing right away that Brennan wouldn’t be able to take this small little man talking to his dead mother and brother seriously.

The episode ender, our patented Booth and Brennan have an adorable covnersation as the music goes up, was wonderful. Brennan’s sincere, although not in the teary eyed way we’re use to, explanation of why she agreed to go and visit Booth’s grave once he’s dead was so straight forward and yet belying all her complex emotions for him that it almost made reevaluate the rest of the episode as more than just a goofy interlude before major plot developments. “I believe that pretending you were still here would make me feel better for a moment. And speaking to you would require me to figuratively look at myself through your eyes, again temporarily, and I think that would make me live my life more succesfully.” It was so intensly Brennan in its explication and yet sincere, and Booth’s being genuinely touched by it as he put his arm around her on the walk out was all sorts of greatness. But damn if at a certain point I don’t think the two of them should just admit that somehow, sans Priests or rings or dresses, they’ve gotten married. Brennan basically just pledged eternity to Booth.