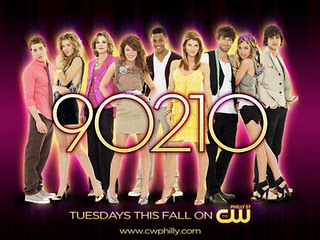 First: Naomi and Liam. Liam is the new bad boy in school (and an exact Dylan McKay carbon copy). She wants him…she fantasizes about him. In this show, this is within the the realm of possibility. Now, as per-usual Naomi fashion, she insists on going with Liam to some place that is “not her scene.” That place happens to be somewhere outside of Beverly Hills, where Liam and his nefarious friends drag race. Drag Race! Yes, Drag Racing. She, again, insists on being in the car when Liam decides to race his opponent—and she LOVES it. I have a problem with this story line because, really? How far can the stories on the show really go? At the end of this date, Liam drives Naomi back to the school parking lot, kisses her, and then drives off. This show needs to remember that their characters may not have parents to set boundaries, but the characters are still 16-17. They are still in school! They haven’t even begun to start college applications. Let’s be real, even if we’re playing by Beverly Hills TV rules.

Second and Third: It took a great deal of strength for Silver to open up and tell Dixon she loves him. However, when she decided to let her love flow freely, everything came out. And, I mean everything. All her crazy. Silver is now obsessed with letting Dixon know how much she loves him, beginning with a tattoo. This week was all kinds of new crazy for her; for her poetry assignment she decided to make a movie. For this movie, she thought it was suitable to film Dixon and her having sex; she even thought it was suitable to show this film to everyone at her school. This arc is a complete 180 for Silver. How can a character go from being reserved about her feelings to showing everyone her sex life, without asking her boyfriend? I just don’t believe this. The cherry on top of this story is that Silver has decided to blame Mr. Matthews, her English teacher. Somehow, she’s convinced herself that Mr. Matthews was getting revenge for the nasty blog she posted about him; and because she thought this was revenge, she broke into his apartment. Broke into his apartment! Again, I acknowledge that Silver doesn’t have a consistent parental figure in her life, but when does it become acceptable to break into a teacher’s apartment? When does it become okay to assault your teacher? Silver is usually my favorite character because she manages to stand out. She speaks her mind. She critiques the 90210-living style. She is sensible, but fun. But I can’t stand this crazy Silver. She has no boundaries (which she thinks is okay, too)…she does not think anything through. I want the old Silver and Dixon back because they were my favorite couple.

This episode really was a drag because it required so much energy to even consider believing these stories, they wouldn’t even fly on One Tree Hill (a show that’s entire purpose is craziness). There’s a thin line between fun/crazy and crazy/crazy and 90210 crossed it this week.