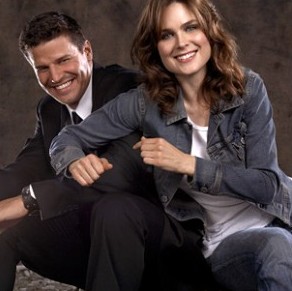 Bones- The Heart of the Matter

Wow. Just when, a few episodes ago, I was ready to write off this season of Bones as missing the pop and verve of previous seasons, the past few episodes have been amazing. I’ll admit it, though, as my one caveat, that I am true and through a sucker for Booth and Brennan stuff (when it’s well written – earlier this season it seemed the writers were using it as a crutch to liven up otherwise boring episodes). The slow burn of their relationship, the intense trust and respect they have for each other, and the fact that both David Boreanaz and Emily Deschanel are first rate performers adds up to my practically swooning.

This week featured two episodes of Bones for the price of one. The first one was a pretty standard rate episode, following featuring a murdered bridezilla. It allowed us a glimpse into Brennan’s marriage dislike and Booth’s optimism, and lots of great repartee between the two, as well as a pretty cool murder mystery. It also set the foundation for episode two, with Brennan at episode end admitting that she’s jealous that she can’t blindly believe in love, and Booth promising her that one day she would.

The second episode ostensibly was about the murder of a Death metal kid* by his freaky cohorts, but it was really about the return of Booth’s one time psychologist**, Gordon Gordon (guest-star Stephen Fry, right), and the effect that has on Sweets, Booth and Brennan. We learn that Sweets was abused when he was very, very (almost unfathomably) young, and that he ended up being adopted by an older couple who died shortly before he started working at the Jeffersonian (we also learned he has an amazing six pack that reminded me of that needless scene in Ugly Betty when Henry took his shirt off just to show that underneath that dorky exterior lay… that.). The Sweets stuff was nice, and I think should do a lot to deepen the character and make him more than just the annoying dispenser of information (although, honestly, I never find him annoying, probably because the star of Freaks and Geeks and Kitchen Confidential just warms my heart every time he doofishly grins). Booth and Brennan rush over to save Sweets from loneliness and give him a feeling of family, and Brennan immediately launches in to share with him her metaphorical scars. He claims it’s out of character. It’s not. Brennan has an intense empathy with orphans. In this one moment, she understands Sweets better than Booth does.

Since Sweets is writing a book about the strange chemistry that is Booth and Brennan, and he asked Gordon Gordon to read it and give it his thoughts, this episode also allowed the characters to talk explicitly about what is normally only acknowledged through sly glances: the lovey dovey ridiculousness of Booth and Brennan (neither of whom has had an actual love interest outside of each other for more than a season, because honestly, it just seems stupid whenever they try).

Which brings me to what we learned about Booth and Brennan tonight. As Gordon Gordon put it, one of them is acutely aware of the attraction between the two of them and struggles with it daily. Although I felt like the end of the episode was hinting towards Brennan, it’s Booth. Come on! All Brennan knows, or will let herself know, is that she respects Booth, intensely, and that when she thought he was dead it upset her a lot. But since she’s not capable of believing in real love, yet, she doesn’t recognize how much she feels for Booth. But he does, and it tortures him. The little one minute moment of Booth’s heart breaking when he heard about Brennan’s abuse at the hands of her foster parents, and the intense look the two of them shared as she put the handkerchief back in his picket was simultaneously heartbreaking, beautiful, and telling, for the audience and for Sweets. And damn if David Boreanaz didn’t knock it out of the park acting wise.

So yes. I really hope the writers know what they’re doing, because they’ve set these two characters up and there’s not much farther they can push them before they have to see what’s so obvious to literally everyone around them (in episode one, even store clerks and plastic surgeons could tell within seconds how in love they were just from the protective and sweet way Booth put his arm around Brennan and the ridiculous way they fight over details).

*I love when they put Booth and Brennan inside some strange microcosm of society (pony play, circus folk, death metal) even though it often leads to absurd episodes, because I like the consistency of character that comes along with it. Booth is inclined to distrust other cultures, he reacts negatively and tends to berate them. But when it comes down to it, Booth understands people. He’s the type of guy you’d think would be homophobic until you find out he’s trying to find his gay brother a date (mind you, his brother isn’t gay, he’s trouble making, but it’s a metaphor, silly!). Brennan, on the other hand, thinks she reacts to everything with scientific objectivity, and her initial reactions to these microcosms tends to be intellectual and interested, but she often finds herself almost irrationally put off by cultures that don’t conform to her value structure. Okay, yes, a little pretentious, and I’ve probably never used the word microcosm so often, but that’s why it’s a footnote.

** I like that despite Brennan’s distaste for psychology, the show actually treats it like a magic elixir that can explain everything. To date, I can only remember Sweets being truly wrong once (about Brennan, when he testified he believed her capable of murder).