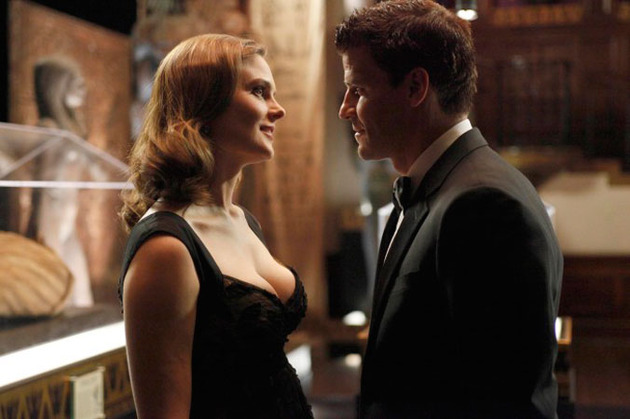 I am well-documented in my love for FOX’s BONES, starring Emily Deschanel and David “Angel” Boreanaz as sexual-tensioned investigators (okay technically she’s a scientist and he’s an investigator, but they both investigate, so sue me.). And half the fun is wondering each and every episode: is this the one where they finally get down with their bad (Boreanaz) and geeky (Deschanel) selves?

Thanks to the omnipresence of spoilers in the Internet culture, I may not know the exact date of said horizontal shenanigans, but I know they’re coming. An IMDB headline (not exactly a place I normally look for spoilers) told me that “now that Brennan and Booth are lovers…” Excuse me, WHAT?! I mean, I had read interviews with the shows Exec Producer that certainly indicated the pair would be (as Scrubs puts it) “bumping uglies” by season’s end, but they were worded just vaguely enough that I felt I could safely ignore them.

But I can’t even blame IMDB. It’s the geeky online establishment, of which I am wholeheartedly a part, that clamors for these spoilers, even at the expense (quite often) of ruining the fun. Although I love that I can now waste time in between classes by scanning through the likes of io9.com or avclub.com and reading all about my favorite nerdy tv shows, I wish there was still a bit of surprise involved in watching character-driven dramas these days.

Or maybe I should just move out of my (wifi-connected) cave and into the modern era.