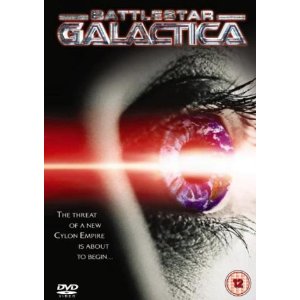 One Down, two more to go!

Sometimes I think my opinions of Battlestar Galactic episodes are as schizophrenic as Starbuck on her mission to Earth. For example, last week I complained that it focused on Starbuck’s very messed up psyche at the expense of action scenes and big reveals. This week’s episode was practically devoid of shooting and Last-Cylon–esque reveals, but I kind of loved it. Go figure.

*If the big Starbuck secret really is just that she’s an “angel” as Baltar so helpfully referred to her, I’m going to be peeved. I didn’t buy that bull when it was the explanation for Head Six (who, by the by, if she is an angel, should probably stop encouraging Baltar to follow his worst instincts), and I certainly don’t buy it for Starbuck.

*I really liked the call back to The Operahouse

*Oh Roslin, even without hair I’d still choose you over any ship

*Nice to see Lee and Starbuck look at each other for the first time since their carnage-inspired smooching.

*This was a night of fantastic acting, but a special shoutout has to go to Tahmoh Penniket. When he broke down, begging Adama to give hima raptor to go search for his daughter, it was one of the most heartbreaking things I’ve ever seen.

I can’t believe there’s only two more episodes. Ever. AHH!