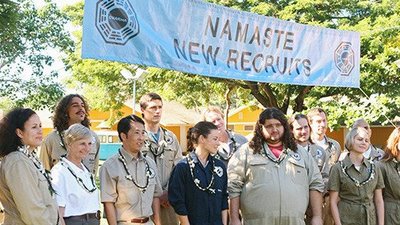 Lost: Where and When We Are

To celebrate Lost’s second awesome episode in a row, I thought I’d use a post to try and wrap my head around the current situations the Losties find themselves in.
There’s a distinct possibility that a good portion of the following is simply wrong, so post in the comments and correct me if Lost’s complexities seem to be beyond my comprehension.
But as far as I know… most of the characters are currently on the island.

Recent Developments
Stuck in 1977, Sawyer and Juliet have set up a domestic bliss where they have been living for 3 years, working with the Dharma Initiative alongside Miles and Jin. Farraday was with them but seems to have vanished sometime in the last three years and Sawyer reports that he is no longer “here”. Whether Sawyer means that Farraday is in a different physical space or a different space in time is yet to be seen.

The crash of Ajira Airways flight 316 left other characters scattered. The plane carried Jack, Kate, Hurley, Sayid, Sun and Ben (who were purposely trying to get back to the island) as well as the deceased body of John Locke, pilot Frank Lapidus and additional passengers including new characters Caesar and Ilana (who had inexplicably been escorting Sayid in handcuffs). Jack, Kate and Hurley ended up on the main island in 1977 where they were found by Jin.

Where Sayid landed is unknown but he found his way to a 1977 Dharma site where he was captured and treated as a hostile. The rest of the passengers seem to have landed on Hydra Island (the smaller island nearby) in present day. From there, Sun and Frank used Ben’s insider knowledge to make their way to the main island, still in present day,where they are confronted by Christian Shepherd and told that they have a long journey ahead. Locke awoke on Hydra Island in present day, alive again, and made his way to the beach where he was taken in by the confused Ajira passengers, including Caesar and Ilana, where he encounters a very injured Ben.

Intrigue:
– Sawyer/Jack power shift and power struggle
– Sawyer/Kate/Jack/Juliet love rectangle
– Can Sun travel through time to get to Jin?
– The birth of Ethan/ Ben as a little boy- creepy
– What happened to Farraday?
– Whidmore or Ben, who’s the real enemy?
and
– When’s the purge coming and how do our characters escape it?