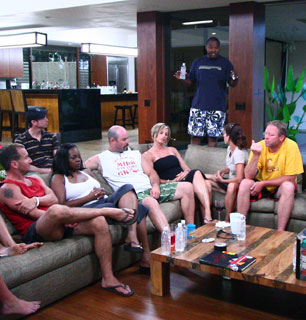 High School Reunionthis week was possibly some of the most aggravatingly real drama I’ve ever seen on TV. It was a true testament to the fact that there are 2 sides to every coin that I spent the episode flip flopping who I liked and disliked. At this point, 3 episodes into the reunion of the class of ’88, I pretty consistently like Kara, Tom and Scott H, they’re all very decent, undramatic people. As for everyone else, they inspire a rant.
First of all I’d like to point out that these people are almost 40 and it is absurd that they can’t seem to muster even an ounce of maturity (a couple people excepted, more on them later).

First you have Dennis, who was brought in by producers for the sole purpose of causing trouble, who drinks too much and terrorizes the house with inappropriate comments on his very first night. As horrifying as this grown man’s behaviour was, it is what happened next that I find inexcusable. Everyone then got together to bad mouth him, write him off as a less-than-human scoundrel and vote to kick him out of the reunion. It is one thing to say you don’t like someone or to complain about being hurt by them, it is entirely another to ostracize him without giving him the opportunity to apologize. The class clown, the wannabe and the preacher’s daughter seem to be taking out all their pent-up aggression over being moderately picked on in high school on Dennis, and in doing so they are being much more of bullies than he ever was, because they’re using mob mentality to turn everyone against him.

The shining light in this meddle of self-righteous bullies is Scott White, the coolest guy at the reunion. Labelled “the skate punk” and an old friend of Dennis, Scott was one of the few people in the house to give Dennis a chance and he was the only one to effectively manage both ends of the situation (when Tyrone and Jenny tried to stick up for Dennis, they came off as insensitive to the people he had hurt). Giving up a date with Maricela to take Dennis on his “hall pass”, Scott explained the situation to Dennis and elicited an endearing sense of regret from the seemingly villainous party animal. If the classmates decide to let Dennis stay at the reunion, it’ll be because of Scott White.

And speaking of bullies, can we talk about my extreme dislike of Liz? I have such a problem with people who play the “woe is me, I wasn’t popular in high school” card. GROW UP! So Jenny was mean to you, everybody had someone be mean to them at some point, you’re 40 years old, let it go! And in repeating “I hate Jenny, she’s such a bitch” to anyone who will listen, all Liz is doing is spreading hateful gossip and, (revelation time) BEING A BULLY in her own right. My God woman, hold your head high, walk a little taller and just deal!

In other news, I think Jessica would be tolerable if she’d stop throwing herself at guys; she seems to have some interesting human insights at times and she knew enough to stay out of the ridiculous high school slam fest that was going on around the issue of Dennis. I want to see more of Scott H, he’s sweet. I haven’t the slightest idea why Tom and Kara ever got divorced. And I honestly believe that Scott S (the class clown) is gay; I’ve never seen anyone get so worked up over someone questioning their sexuality, unless that person is in the closet. Also, there are also too many Scotts on this show (3 is too many, I get them confused).