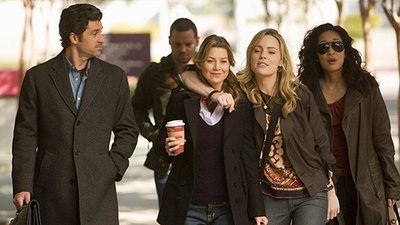 In stark contrast to this week’s other Shondaland offering, Grey’s Anatomymade me very very happy this week. It, of course, had some serious problems: the extreme idiocy of the interns, Izzy going crazy for no reason when she’s been perfectly sane for years now, every that has anything to do with Denny, Lexi or Sadie. But the rest of it, it was all fabulous.

Bailey played a small but wonderful part in the episode. The concept of teaching has been a very important part of this season, recent intern stories throwing specific light on the failings of the residents as teachers. In this episode the audience was reminded of how great a teacher Bailey was. While Meredith and Christina were flying solo on the emergency surgery, Bailey was right by their side guiding them through as helpfully as when Burke taught Izzy how to cook a turkey. Bailey refused to give her former interns a speech this week when they asked her what to do, she knows she taught them well and forced them to make their own speeches and learn to teach their interns. Her scene with Callie at the end was also a highlight of the episode.

And speaking of Callie, she was absent from most of the episode but the time she spent on screen was some of the best of the episode. “Married, betrayed, gay, abandoned”, Callie’s had a tough year, then she got her nose broken by a disturbed patient. The point of that thinly veiled metaphor? Callie and Sloan. Their friendship is one of my favourites in the show and if it takes him fixing her broken nose for their awesomeness to come across I’ll take it.

Sloan, in general, was amazing this week. Always one of my favourites, Mark Sloan showed his gooey side again this week not only in comforting Callie (while maintaining their love/hate banter) but by helping a 13 year old girl who felt guilty that her dad was in the hospital.

Karev tapped into his gooey side for a minute as well in this episode when he told Izzy that he can handle messy and that he’s not going anywhere. This, of course, shed light on how incredibly ridiculous she is being in holding onto a dead guy when the amazing Alex is right in front of her, but what can you do. Karev was also the doctor in charge of my favourite medical story of the night…

Will Bailey and Mary Cherry’s poop transplant. That’s right. The story of a likable hypochondriac (Leslie Grossman from Popular) who overreacted to a pimple and took antibiotics, causing her to need a fecal transplant from her adorable husband (Josh Malina, Sports Night, The West Wing) was my favourite medical story. Not only was I incredibly excited to see both guest stars, but the dynamic between the couple was really engaging and their chemistry was dead on. It was simple, it was funny and it was very sweet.

Everything else I loved about the episode had to do with Christina Yang. If there’s one thing I like about the horrible new character of Sadie, it’s what her existence says about Meredith and does to Christina. As the executive producers of the show (Shonda Rhimes and Betsy Beers) pointed out in The Official Grey’s Anatomy Podcast this week, Sadie confirms that Meredith is a serial best friend-er. She develops close bonds with the best person around, then moves on when she moves on in her life. Christina, obviously, doesn’t work like that. That’s why she’s so threatened by Sadie. I think that’s an incredibly cool beat to play for both Christina and Meredith, and one that hasn’t been explored much on TV. Christina’s completely founded jealousy and the fierce loyalty she proved yet again in this episode show just how great a friend she really is. Man she’s cool.

And the other Christina thing I loved? OWEN HUNT. I’m completely obsessed with Owen Hunt and Kevin McKidd (the actor who plays him). He’s unlike any character we’ve ever seen on Grey’s Anatomy. He barely did anything in this episode and I was still glued to the screen hoping he’d come back on and when he did I was far from disappointed. I’m very proud of the writers for not jumping on giving Christina a new love interest. Burke left and it was an entire season before the possibility of something new came along, and even now the characters are left dancing around the issue. That pickiness is very true to Christina’s character, a character that I would be very mad if they screwed with.