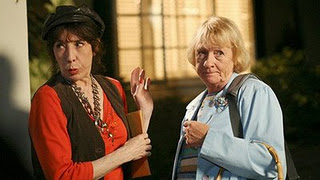 Desperate Housewivesthis week provided a couple wonderful blasts from the past.

Then came the best part of the evening (Lynette and Tom’s heartfelt rehearsal space encounter aside), seeing Mrs. Landingham and Debbie Fiderer (Mrs. Landingham’s replacement) playing rebel rousing sisters. During the run of The West Wing, where they both played president Bartlett’s secretary, who would have thought that stellar comediennes Kathryn Joosten and Lily Tomlin would share screen time plotting revenge on a devious neighbour.

Even when the housewives themselves fail to enthrall, DH never disappoints with the guest stars.