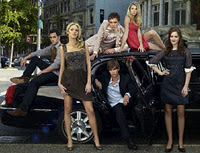 Spot the differences- I dare you.
After the buzz that last year’s premiere of Gossip Girl created, its home network, The CW, is doing all they can to replicate the effect (note that I didn’t use the word “success” because on a revenue, ratings, business level Gossip Girldidn’t deliver).

Gossip Girl‘s second season is off to yet another luxurious, naughty and scandalous start while the new 90210 tries desperately hard to make us care about their uninteresting, bratty characters (even the characters who aren’t spoiled are brats). Privileged is making a run at the same demographic too, though the charm of its heroine Megan (Joanna Garcia), her friend Charlie (The OC‘s Zach) and a handful of likable rich folk may may actually keep  Privileged interesting.
Now don’t get me wrong, I’m not saying that a show or two about the entertaining elite is a bad thing. I actually really liked the original 90210 and watch Gossip Girl faithfully. What I’m annoyed by is The CW’s approach to new programming. The positive response to Gossip Girl should not have spawned a full season of look-alikes, it should have given the network the confidence to go out and find new and original programming in hopes of finding the next thing that will have such an impact.

The CW’s predecessors (The WB and UPN) were responsible for some of the best shows of the past couple decades, and each one was a unique enterprise. Buffy, Dawson’s Creek, Roswell, Everwood, Charmed, Felicity, Gilmore Girls, Smallville, Veronica Mars, even 7th Heaven; each was a hit in it’s own right, it wasn’t a bland copy of last year’s fare.

I complain, but I’ll still be watching 2 of these 3 carbon copied shows. Gossip Girl snagged me last year (and I honestly think that it’s a well produced show- for what it is) and Privileged convinced me to come back next week in the Pilot episode when Megan undercut her rousing speech about responsibility, with the line “uncle Ben is Spiderman’s uncle, not mine. I just wanted to make that clear”.

And as for Dawn Ostroff and her team over at the CW, all I have to say to them about next year is “be brave, little Piglett, be brave”.