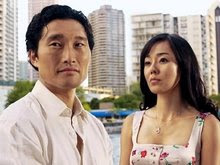 Another brilliant episode this week from the geniuses over at Lost.
Finally some Sun and Jin. They’re some of my favourite castaways and their stories are always so beautifully told (and acted by these two pros).

That said, I totally saw the twist coming that they weren’t in the same time period. I had a hunch it wouldn’t be that simple and when they weren’t showing them together ever my suspicions grew. Once the Oceanic 6 were mentioned in Sun’s scenes and we got a glimpse at Jin’s cell phone I was sure that he was in the past and she in the future. I also had a feeling he had died. Tragic. Absolutely tragic. I am, however, very proud of myself for figuring it out before the big reveal.

Now the questions we are left with are: how does Sun get off the island without dying like the other pregnant women? does that mean they are rescued in the next month? does Jin get off the island alive and is included in the Oceanic 6 then dies of other causes or is there another survivor we need to know about? and why doesn’t Hurley get his hair cut?

also: it seemed as though the captain of the ship was being pretty straight up with Sayid and Desmond. Is he really not to be trusted or is the “secret informant” secretly not a good guy. And speaking of Ben’s “guy on the boat”, I can’t stand Michael. Even under another name, I see Harold Perrineau’s face and I know a good character is getting hurt because of Michael’s idiocy/selfishness. Everyone’s better off with him gone. And anyone who didn’t see the reveal of Michael on the boat coming a mile away clearly has not been paying any attention at all.

Overall: Spectacular performances once again from Yunjin Kim and Daniel Dae Kim. I completely approve of the direction their story is taking and the method in which it is unravelling. Loved the combined flash forward and back. Adored the reconciliation between the two on the island. I still trust Juliet even after a bought of questionable behaviour in the last couple episodes and think Sun should too. I enjoyed the little almost-cameos of Bernard fishing with Jin, Jack checking up on Sun, Kate showing them the map and Hurley visiting Sun in Korea. I’m curious about the boat though wary of anything involving Michael.

Also, I think its about time for a little Sawyer. Yes? I think so.