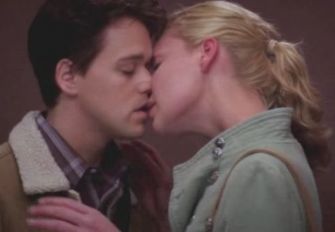 Poor Callie. I love Callie. Trouble is I love Izzie too. I like George but he’s not one of my favourites so Ive decided to throw all the blame his way so that the characters I like are simply victims of circumstance.

Whoever’s idea it was to throw Izzie and George together needs to not work in television (yes, even if it was the almighty Shondra who’s right about soo many other things in this world). First of all, the precedent set at the beginning of their relationship was that Izzie would never even look at George in that way- she asked him to buy tampons. Secondly, she’s a wonderful character but is coming off flighty: she only took half a season to get over Denny and decide that George was all of a sudden the love of her life. She only wanted him once he was unavailable which isn’t true love so much as a character flaw. and its not true to her character in the first place. Izzie isn’t flighty at all; she’s committed and idealistic and caring and loyal; she wouldn’t fall in and out of love nearly as fast as the writers have her doing. and Callie, yes I understand that it creates much more conflict to have the decision be between two good women (more Casablanca than Titanic) but that’s only fair if the women are more equally matched. Callie is insecure about not being the belle of the ball type girl. She’s strong and independent and Izzie even said herself that “George is [Callie’s] McDreamy“. George choosing Izzie doesn’t just mean that Callie looses the love of her life, its exactly her worst nightmare from high school– the pretty blond model stealing her boyfriend (and though Izzie is more than that, its still too cruel). It was exactly the right Casablanca dynamic when McDreamy was choosing between Meredith and Addy, both were good women but it didn’t have the same tone as a high school popularity contest (though why anyone would EVER choose Meredith over Addison I will never know). Besides, Izzie was never George’s ideal. He never inclined towards her, I would have accepted him leaving for the girl of his dreams (Meredith- who I hate so am glad they didn’t pursue that further, but still, in theory…) but Izzie wasn’t that. She was his best friend. Izzie and George have wonderful chemistry together, their dialogue sparkles and they play off each other beautifully, or at least they used to before all the drama began. Which brings me to the root of my disapproval…

Why Can’t Men and Women EVER be friends on TV????

Someone got it into their head that unless there is romantic drama men and women are boring to watch together. The network even fought Seinfeld for years to get Jerry and Elaine together (and even though they were never together on the show, they still had dated). Joey and Dawson had one of the greatest dynamics on TV before they made it about unrequited love. Xander and Willow were wonderful, then they hooked up. Andy and Nina, Jack and Becky, Joey and Rachel, Dawson and Jen (for that matter- every pair they could come up with on DC), Donna and Josh, Kat and Ethan, THE LIST GOES ON…Even Sports Night’s Dana and Casey flirted with the possibility of a relationship. Men and women CAN be friends. They can be best friends. they can be lean on each other, call at 4am, finish each others’ sentences BEST FRIENDS and not fall in love. Now mind you sometimes its wonderful when they do (aka Jim and Pam, Monica and Chandler, Hannah and Bright) but more often than not TV shows throw them together because there’s nothing better to do. It then ruins them forever when what they had was wonderful. There are shows who attempt do try and preserve this rare but awesome male-female dynamic. One Tree Hill’s Hailey and Lucas share a badly written close friendship but the writers never spoiled it with a relationship, Veronica Mars and her best friend Wallace were amazing, Ted’s close friendship with his best friend Marshall’s wife Lily on How I Met Your Mother is one of my favourite relationships on TV.
SO WHY COULDN’T GEORGE AND IZZIE BE LEFT ALONE? Their catch you when you fall, can talk to you about anything-ness was superb and they will never have that openness again (not to mention poor Callie will be devastated).

I REALLY hope that Private Practice holds true to the wonderful dynamic they’ve set up between violet and cooper and doesn’t ruin it with a relationship- it’s looking like they might go the right way on that one. fingers crossed.