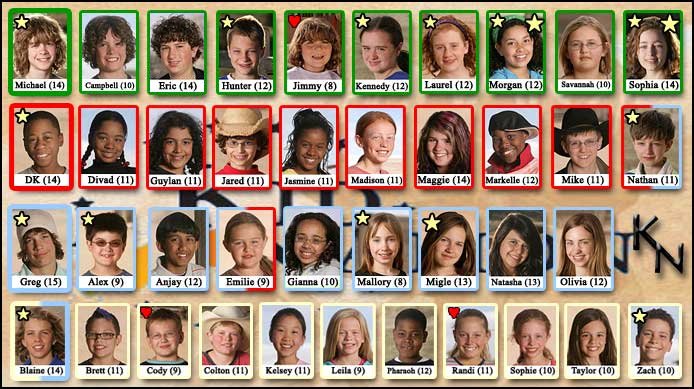 There has got to be something wrong with me because I just cried like a baby while watching Kid Nation. The friendships that have developed are truly touching and the emotions are more real than any other reality show could hope to be. When Cody left it was just like the last day of camp when you’re leaving your friends who live far away and you wont see them again. The way Campbell cried and Morgan took care of him was so touching. and while I’m on the topic… Morgan is amazing!! the way she handled the issue of faith and the prayer service was truly impressive.

Some of these kids clearly were raised with very rigid values and not much exposure to anything else but the way some of them reached out to learning other religions was amazing. When Zach was teaching the other kids the similarities and differences between the bible and the Torah I couldn’t help but be overcome with hope knowing that there are kids like that out in the world. When the little Christian girl started to take part in Anjay’s Hindu ritual when earlier she’d had no idea what Hinduism even was- oh, beautiful. And while some (aka Mallory’s ignorant older sister) are clearly single minded (um hello, cross section of the American population- they cant all be amazing), most of these kids are awesome. That prayer service was unbelievable- and I’m not even at all religious.

Alex is clearly a prodigy child- he’s absolutely BRILLIANT!!!! Mallory’s got some game too. Zach is unbelievably inspirational and I have no doubt in my mind that he’ll be leading the yellow team very soon. Morgan is clearly an extraordinarily beautiful and nurturing person. Sophia is spunky, intelligent and independent. Michael is a white knight with a sparkling intellect and an incredibly noble sense of right and wrong. Jerrod is a creepy little kid (had to let that be known even though this is a list of good things in general). Mike is clearly a together and capable guy with a solid head for leadership and Anjay is a strong and positive influence while keeping calm and collected even under scrutiny. WHERE DID THEY FIND THESE KIDS? AND CAN THEY PLEASE RULE THE WORLD SOME DAY? just keep Greg, Emilie and TAYLOR out of the way.

Taylor needs to be thrown off this show- NOW. She represents so much of what’s wrong with the world.