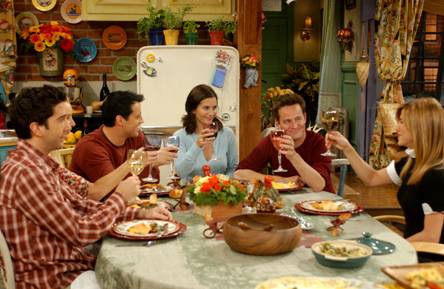 What Happened to The Reign of Sitcoms?

Once upon a time there was a multitude of great television encapsulated into succinct 23 minute installments. This was when sitcoms ruled the airways… not in syndication.

My TV obsession came in the age of FRIENDS, Will & Grace, Frasier, Sex and the City, That 70s Show and Seinfeld. These days there are only 3 sitcoms that make me laugh even a fraction as much as any of these did- How I Met Your Mother and The Office and Weeds.

It is a truth pretty much universally acknowledged that Jim and Pam are the new Ross and Rachel but the old energy just isn’t there.

This past Monday, Canadian Thanksgiving, The Women’s Network aired a FRIENDS marathon of Thanksgiving episodes. Viewers got to experience gems such as the Thanksgiving football game, Chandler telling Monica he loves her while she’s shimmying with a turkey on her head, Joey eating an entire turkey on his own, Phoebe pretending to like the Green Bay Packers to escape helping make dinner, Rachel sticking a marshmallow up Monica’s nose, Judy and Jack Gellar’s bizarre antics, Michael Vartan as Richard Burk’s hot son, Brad Pitt and the I Hate Rachel Green Club, Chandler in the box, Phoebe’s WWI Thanksgiving memory, Fat Monica, Chandler’s Thanksgiving aversion, Monica and the toe, Rachel’s schwooping, Monica’s neurosis, Mocolate, potatoes with peas and carrots, tater tots, mashed potatoes WITH the lumps and grilled cheese sandwiches.

… and that’s off the top of my head. I taped the marathon, I didn’t even watch it yet. If I can remember that many Thanksgiving years after the finale- clearly Bright-Kauffman-Crane got something right. With the failure of Marta Kauffman’s show on the WB and the lack of funny that IS David Crane’s The Class, the terribleness of Joey, the horrendous 2 and a Half Men still trudging along and The New Adventures of Old Christine mediocrely breaking the Seinfeld curse, the future of the sitcom is fading fast.

Hopefully HIMYM, Weeds and The Office will be around for at least a couple more years and perhaps sometime soon the general public might sit up and realize that by allowing networks to entertain us with cheap and easy reality TV, they are killing what used to be a paragon of entertainment.