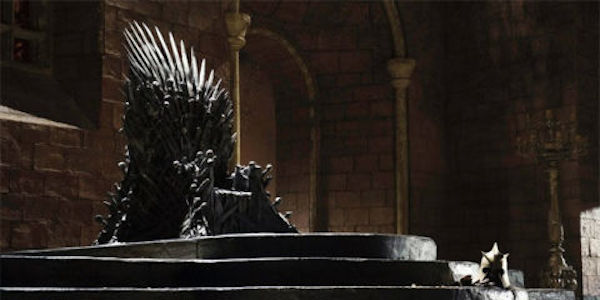 GOT & The Changing Face of Fantasy

Let’s take a minute to talk about fantasy. As a rule, your heroes are displaced, usually by circumstances seemingly out of their control. Occasionally, they are revealed to be “chosen one” types, figures of myth/destiny/legend that come on the scene to save/destroy/etc the world. More often than not, fantasy stories are bildungsroman, coming of age type stories – the reader gets to bumble along with the bumbling hero to learn and grow into their protagonist role. The effect, of course, is to introduce the reader gently into the story, to give them a framework for this sprawling, intricate landscape the author has so kindly created for them, while still maintaining the appearance of a classic, rising action plot.

As of late, this has started to change, with projects like Latino/a Rising! and genres like magical realism and international authors like Haruki Murakami, Salman Rushdie, Junot Diaz and so forth. But it is undeniable that when the zeitgeist of fantasy is dominated by Western culture, Western values, and Western tropes. High castles, damsels in distress, knights in armor, Christ-like figures and images, European themes, Old English words and customs…the list goes on. Some of our largest fantasy work in the media has only reinforced this. Lord of the Rings, arguably the most successful, imaginative fantasy franchise of the 21st century, was created by J.R.R. Tolkien to give the British Isles a unifying mythology, unique and rich and so similar to reality as to be indistinguishable. So he has languages derived from Gaelic, Welsh, Latin and Saxon tongues, he creates different groups of people to make up the clans of the country, and he casts his villains as orcs, goblins and creatures of fabled horror.

It’s interesting to note that the evil humans, few and far between as they are, are portrayed in the film as being of Asian descent, specifically, Middle Eastern. The common conceit at the time of their release was that the films were a critique of the Iraq conflict, but without delving into speculation, it’s safe to say that the Haradrim, as they are known (whose antecedents are called ‘Black Men,’ if you’d care to read into that), with their elephant legions, turbans, and guttural speech, are meant to represent the most alien culture imaginable to the world of hobbits, elves and dwarves.

I hope it’s now apparent that I am a huge nerd, but moreover it should be apparent fantasy has a bad history of dealing with…well, history. The cultures that fantasy authors borrow from are steeped in racism, xenophobia, a general mistrust of any otherness. And let’s not forget the Crusades, the Israel-Palestine issues, the long and bloody narrative of colonialism that many Western civilizations were built upon. We’re talking about medieval times here, the literal Dark Ages, where people died before 30 and blamed bad milk on witchcraft. It’s no wonder most heroes and adventurers start out as farmers, orphans, disadvantaged folk – in keeping with the bildungsroman trait/educational incentive for the reader, no hero has more to learn than someone at the bottom.

But fast forward to 2016. Season 6 of Game of Thrones is right around the corner, and the Internet is on fire with predictions, suspense, conspiracy theories and memes. This show has been rocking people’s minds for almost 5 years now, and with every trailer, every teaser, ever cast member interview and leaked set photo, it has built the anticipation for new episodes to a fever pitch. Teachers have threatened their classes with spoilers if they don’t calm down. HBO has built a fortune off the world’s streaming services, all begging for a scrap of the series. George R.R. Martin, a large figure in fantasy circles before the show even existed, was catapulted into stardom with such intensity, there are songs about him.

It is fantasy like no other. More accurately, it is fantasy perceived like no other. Game of Thrones is famous for borrowing from real historical events and eras, most obviously with the War of the Roses (Lancaster=Lannister). Cultures and mythologies have been hybridized in the series to create all the various peoples, places, nations and conflicts for the story. And there is a lot of it, to be sure. Each season introduces new characters, new environments, new themes and new twists of fate. For a time, there was a real concern that there weren’t enough places on Earth to shoot Game of Thrones, that the fantasy world was richer than our real one could ever hope to be.

And perhaps it is a richer place. But certainly not a better place. People, even main characters, die off with an ease that seems almost callous, certainly cruel to the viewers. The show is notorious for taking things to the next level, whether it deals with death, sex, or death-sex, or sex-death. The characters are all massively complicated, with relationships to everyone, oaths and debts and bargains across the continent of Westeros (the Britain-shaped place where much of the story takes place), some even across the Narrow Sea. The common people, the working class and the struggling poor, are slaughtered, raped, enslaved and terrorized into either uproarious rebels or mindless servants. Those of noble stature often find themselves wearing nicer clothes, eating better food, and maintaining lofty titles, seats and privileges…but just as many of them suffer the same fates as the people they rule over. No one embodies this more than Queen Cersei. This beautiful, ambitious figure rises and rises in power until it seems unimaginable that she could gain any more. She sleeps with whomever she wants, kills where she pleases, and anyone who gets in her way eventually submits to her. But in the space of a few episodes, by making the wrong alliance with the wrong religious organization, Cersei is tossed in a cell, shorn of her lovely tresses, and bandied through the streets of King’s Landing. The show sends a clear message to its audience: no one is safe.

Let’s be clear here, Game of Thrones really is a thing apart. When it comes to the aforementioned issue of the West being idealized and everything else being demonized, the show addresses it properly, by demonizing and idealizing in more or less equal parts. True, much of the story is set in Westeros, given that the throne in question is there, but I’d say most of the fans are drawn towards the characters moving in more ‘foreign’ climes, the lands of Essos, across the Narrow Sea. As the show has progressed, some of its most beloved characters have moved in that direction. Daenerys, the original sweetheart of the series, has gone from Dothraki bride to ravaging queen. Varys and Tyrion, the oh-so lovable rogues, are on a Blues Brothers-style mission from God to save the world. And poor, tortured Arya has wound up amongst killers, trying to make herself into one of them. All of this takes places in outside of Westeros, in lands of magic, slavery and dragons. Oh, of course there’s the standard eroticization of the East, the swarthy pirates and the curved blades and poisons of wicked Arabs. But there are some excellent hero-types in those places too, characters that fit right into our bildungsroman, coming of age, fantasy hero archetypes. Daario Naharis, the mercenary captain converted into Daenerys’ loyal soldier and lover. Grey Worm, leader of the legions of Unsullied that the dragon queen commands. Jaquen H’ghar, the enigmatic and riddle-tongued Faceless Man. The lands beyond Westeros are full of princes-in-exile, the downtrodden revolting, chosen ones being discovered and thrust into the light. And while that’s all well and good, the scales wouldn’t be balanced without some light being shed on the darker side of the ‘good’ guys. The fair-skinned folk in pursuit of the throne are cold-blooded murders as often as they are well-intentioned reformers. Everyone is plotting and scheming and backstabbing constantly, certainly more prominently than those to the East. There are references to witchcraft, incest, torture and mutilation that expose the darker side of the civilized world, and that’s just as important as broadening the definition of what color a hero’s skin can be.

Westeros itself got more diverse in season 5. Previously, we had been lead to believe that the majority of the continent was dominated by Vikings, British people, and peasants. But the last season took us south, to the kingdom of Dorne. Now, Dorne is mocked loudly and openly in the earlier seasons, and is considered by most who live above it to be a debauched land, worth visiting only to bring back its high quality wine. In season 4, we were introduced to our first character from Dorne, Prince Oberyn Martell. He was regal, proud, and awe-inspiring. Oberyn bedded more men and women than Tyrion, killed with more grace than Jamie, and played the Great Game so well that Tywin appointed to the council and Varys gave him his respect. For some time, he was the only major threat to Lannister sovereignty in the capital. After the season ended, there was a lot of talk about what else we could expect from Dorne. Needless to say, the producers outdid themselves. Dorne is the desert, speckled with oases, peopled by robed men on horseback and olive-skinned women in water gardens. It is the closest thing to paradise in the show, even with the terrible violence that happens there. And as far as representation goes, the casting for Dorne pulled actors from India, Italy and North Africa, just to name a few (anyone recognize the doctor from Deep Space 9 in Doran Martell?).

And now season 6 is upon us. The stage is set for Sansa to really come into her own and take charge after all the terrible things that have been done to her. Jon Snow lies bleeding in Castle Black, his fate uncertain. Bran wanders somewhere beyond the edge of the world, supposedly learning how to fly. And that’s just the news from the Stark side of things. Dorne is on the edge of war with the rest of the kingdoms. The Sparrows are ready to face off against the Iron Throne. Daenerys is back amongst the Dothraki, dragon-less and supposedly a long way from friends. It is a maelstrom of matches – some are so close as to risk an all-consuming blaze, and some are burning brightly on their own. Fans have abandoned using the books as guides to predict what comes next, because what comes next, as far as the trailer tells us, is a lot of war, a lot of pain, and a vague glimmer of triumph.

I wouldn’t go so far to say that the show is flawless. Very few shows ever are (Batman: The Animated Series comes to mind). Game of Thrones has gotten into trouble in almost every way a show can. They’ve hired multiple actors to play the same role in different seasons. They’ve played fast and loose with issues of sexual abuse, colonization, over-the-top violence and more. The decisions to diverge from the source material, where such decision were made, have been divisive amongst the fans. There are more characters to keep track of than audiences are used to (although with the upcoming Marvel franchise Infinity War’s bill of 90+ characters, audiences had better get used to it), and some of them are boring, some of them are offensive, and nearly all of them have enough screentime to warrant bigger royalty checks.

But it is, by and large, a good show. Again, more importantly, it is good fantasy. Perhaps most importantly, the producers have managed to give every A-grade stage actor in the United Kingdom a job, and an impressive mark on their resumes. If the reasons I’ve listed above aren’t enough to watch it, try this one on for size: you and your friends won’t be able to stop talking about it.