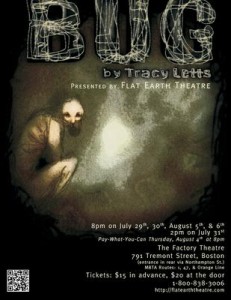 I think I’m infected, but that’s not always a bad thing.

Flat Earth Theatre’s production of the problematic Bug infected me with inspiration and awe. I wasn’t a fan of the play before seeing this version. I thought that it was an actor’s journey into internalized storytelling, but Flat Earth rose to any challenges in the script with gusto and skill. Let’s explore why I’ve been bitten by Flat Earth Theatre’s Bug’s brilliance.

First of all, I loved Nate Kruback’s set. Together with Kevin Kordis, the prop master, Kruback created a replication motel room so realistic that I could smell sex on the sheets, see the wallpaper peel, and hear the dull hum of the lights. Their attention to detail within the room was uncanny, and I loved to let my eyes wander throughout the tiny world to see what knickknacks told something more about the mysterious inhabitant, Agnes. The Factory Theatre’s Black Box was as hot as ever, but I loved the audience configuration because I felt like I was almost inside the motel room with Agnes and Peter (an especially frightening idea towards the end of the play). The intimate setup didn’t work as well for the make-up designer, Andy McKnight, but his work grew on me as the play progressed. Agnes had very clearly, painted-on bags under her eyes (or was it a black eye?) in the opening scene and the fake-ness of the heavy makeup drew me out of the play for a minute. However, later in the show, the make-up was integral and spot-on. McKnight’s flawless and artistic use of blood was a testament to his creativity and skill as a make-up designer. 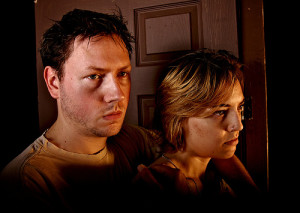 But ultimately it was the actors who truly blew me away. With a slow start to Act 1 (which, I admit, may have had something to do with my indifference towards the show going in) the piece slowly built to a wonderful Act 1 ending. Individually, the characters were wonderfully subtle and nuanced with strong acting choices by all. From her first entrance, Emily Hecht’s R.C. was a power-house performer who almost seemed too much for such a small room. Even better were Hecht’s scenes with Steven James DeMarco’s Goss; the two actors are a chemical reaction waiting to happen and it was truly electric to watch them interact in such a confined space. Their struggles to get what they want seemed organic and purposeful, and I was sad that these wonderful characters were not featured more in the show, an indication of their strong acting with limited stage time.

I struggled at first with James Hayward’s Peter and Julie Becker’s Agnes. I thought they were perhaps a little old for the roles they were cast in and I didn’t buy into their chemistry in the beginning. They sold me, however, with their individual performances. Hayward did a tremendous job at being appealing, strong and vulnerable in interestingly diverse ways; his ability to change tactics with his scene partner (mostly Becker) was marvelous. Hayward’s believable and inspired performance was like a masterclass in acting technique. As for Agnes, Becker’s lethargic attitude grew on me, especially in contrast with Hayward’s twitchy energy. Their dichotomous personalities complemented each other perfectly and eventually established a solid chemistry and relationship as Hayward and Becker developed similar personality traits. This development showed not only well-directed, well-rehearsed dedication but it also indicated very acute skill.

I can’t say enough good things about Jake Scaltreto’s directing. His ability to shape the scenes and the play into a wonderful story with building tensions and climaxes was stunning and riveting. He and his cast created real and humanized individuals that made the story all the more chilling to watch. Scaltreto’s choices were poignant and effective, and he assembled a strong production team to support him in his vision. With an incredibly powerful and engaging final scene, Scaltreto made an incredibly strong decision not to have a curtain call. I was left thinking about the incredible final moments of the play instead of a set of formulaic bows. The last ten minutes were truly breathtaking and they alone were worth the price of admission.

Bug has one more weekend with performances at 8PM on August 4th, 5th, and 6th at the Factory Theatre in Boston’s South End on Tremont Street.

Don’t let the fear of bugs scare you away!