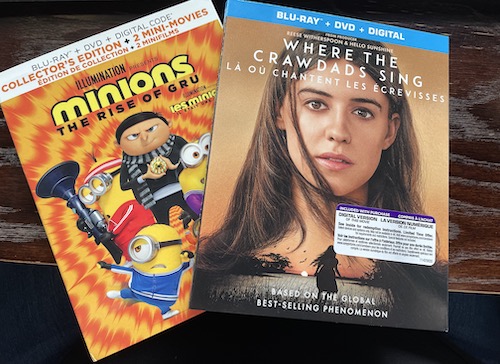 No one else is anymore but we’re still physical media devotees round these parts. In that spirit, we’re sharing the details of a few new home entertainment releases for collectors who are still into that kind of thing.

Review copies were provided by Sony, Universal, and Warner Bros. All thoughts are our own.

I loved this wacky action dramedy set aboard a high speed train in Japan. The cast is outrageous from movie star of movie stars Brad Pitt to personal faves Aaron Taylor-Johnson and Brian Tyree Henry to the iconic voice on the phone (weirdly spoiled on the back of the box, don’t look at the back of the box). I wasn’t wild about Joey King but I can nitpick anything. The special features on this set are decently plentiful but terribly produced so, unless you like being condescended to about super obvious “easter eggs” (they’re mostly not really easter eggs), I’d skip them. But I’d still buy the set. Because special features are nice but your collection should be about the movie itself and this is a really fun, ambitious, densely packed movie absolutely worth rewatching.

The deleted scenes are pretty decent on this Collector’s Edition so if you saw Nope in theatres and were super into it, go for it. But if you, like me, are a general Jordan Peele fan who thought this one was just ok, I’d hold off. There’s gonna be a killer compendium box one of these days that spotlight’s Peele’s work as a director and I’m happy waiting for that.

This wild teen work will likely mostly be remembered for its leading lady, the starriest of stars Zendaya. The actual show itself is frustrating because it tries too hard to shock, playing up the worst nightmares of imagined contemporary high school, but when it slows down and really zooms in on the characters, it can be mesmerizing. The Christmas Special that consists entirely of Zendaya’s Rue and her sponsor talking in a diner is a masterpiece. Luckily, the Special Episodes make it onto this handy two-season set. There’s not a ton in way of special features but they did at least try to include a few. At $45 it’s a pricey set but for two seasons (plus specials) of a show that likely won’t disappear to time, that’s not terrible. Watch an episode or two before buying; this show is not for everyone.

This under-the-radar CW drama deserves a second look from everyone who’s been stopping by that landmark network for a casual DC fix then peacing out. With 13 episodes in its second season release, the $25 price tag is pretty acceptable if you’re into this show (even with a measly gag reel as the only special feature, a true crime on a show like this with so much that goes into making it). Find an episode online to give it a shot pre-purchase but definitely give it a shot.

Ok, this may be a hot take, but I wouldn’t buy this one. Yes, it just won a couple Emmys and is/was overwhelmingly buzzy upon release, but I just don’t think this show is actually that good and ultimately I don’t think you’ll really remember it when you look at your collection 10 years from now. If you’re a prestige chaser, go ahead. But $25 for six episodes and very few special features is not really how I roll, especially if I’ve already seen and only mildly enjoyed a show.

Another hot take but I actually would buy this one. Hear me out- I love a solid network sitcom, and Young Sheldon is one of the only consistent names in that particular game right now (we’re in a bleak time for network sitcoms, maybe the bleakest ever). It’s obviously not the most inspired show of all time but it’s pretty good, has a really big heart and a really underrated ensemble (and it’s nothing like Big Bang Theory if you’re one of that show’s haters and that’s been holding you back). You also get 22 episodes for the price of HBO’s 6 which, if you’re a real TV lover (like, an old school serialization and FCC regulations appreciator of the art of television-making as distinct from filmmaking), actually means something. Again, prestige chasers and film snobs stay away, but this set will fit great onto my shelf with all the other real television.

This release splits the difference in the battle of the TV-on-DVD releases this season. 10 episodes of a middling series for the same price as the others- $25. This show is all about the personal call. It’s really a matter of taste- you love it or you couldn’t care less. I personally couldn’t really care less but that’s because it’s really not my genre. Maybe it’s yours, in which case it’s fun to have your niche thing in your collection. The value is here if you value Lucifer and for no other reason, simple as that.

I enjoyed this mournful adaptation with its moody marshes and brooding teenagers. A characterful elevation of a Sparks-y Southern-set romance, the story’s intriguing murder mystery and light-but-still-worthwhile commentary on how outsiders are treated in society sets it apart from others in its genre. The home entertainment release has some okay special features but this purchase really comes down to whether it’s a movie you want on your shelf. It looks good on mine next to A Walk to Remember (still the reigning champ in this style) but it’s definitely not a must-have.

Illumination’s blockbuster Minions series gets a wacky prequel with tons of special features and bonus content included in the collector’s edition release. The set is a little pricey in my opinion because I personally don’t think this franchise has much in the way of valuable rewatchability (though your kids may disagree) so click here to enter our contest to win a free copy.