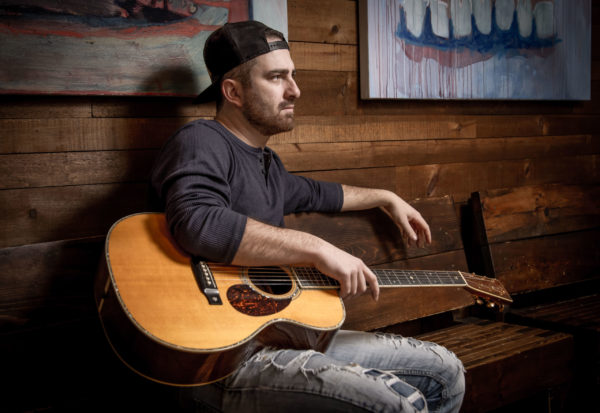 “Growing up in Ajax, Ontario, Kris Barclay got his first guitar for Christmas when he was thirteen years old and would sing along to his favorite Country songs when nobody was around. Fast forward, and Kris has opened for such artists as Brett Kissel, The Washboard Union, The Road Hammers, Gord Bamford and Dean Brody. In 2019, Kris was nominated in the Rising Star category for the Country Music Awards of Ontario. At the 2018 Boots and Hearts Music Festival, Kris was voted by fans as the wildcard entry into the Emerging Artist Showcase, allowing him to compete against six other artists in front of a jury of country music artists and industry execs. Kris went on to become the first ever wildcard artist to win the showcase, earning him a spot on the mainstage to close the weekend’s festival, and a trip to Nashville to write with some of Country music’s top songwriters. Also, part of the win was a recording deal with Warner Music Canada, which saw the release of his debut single ‘Loved You Like That’, which has garnered over 1.5 million streams to date. Off stage, Kris has been raising funds for mental health and PTSD in the Veteran and First Responder community. Partnering with Wounded Warriors Canada, Kris was able to raise four thousand dollars in 2020 for their programs”.

I’ve always been a big fan of music, and always had music playing while I did anything growing up. As a kid, I was pretty committed to hockey and never really considered a life in music until I got my first guitar at 13 years old. At first it was a hobby and just something to do to relax, but it quickly became a passion and towards the end of my teen years I started to get some aspirations to play some local gigs. I quickly fell in love, the skates were hung up and I jumped into the music world with both feet!

I never ever took music lessons or guitar lessons of any kind. I just taught myself some chords and would play music and try to figure out how to play the songs by ear and that’s how I learned to play. Same thing went for singing. After I learned the guitar I’d just hum along and start singing and try and teach myself how to sing. A few years into playing shows I was introduced to my vocal coach who I’ve been with for many years now, who’s helped me learn to control my voice and given me the strength to broaden my range and to last multiple shows in a row night after night and still be able to perform. I relate it a lot to training for hockey, and the discipline skills learned through sports has really helped me stay focused on developing my voice and trying to make sure I can do this for as long as I can.

I listened to all kinds of music growing up. When I discovered country music, I felt like it was a melting pot of all the things I love about music. The lyrics, the guitars, the stories, the fun upbeat carefree atmosphere and most of all the fans of country music really reeled me in. When I first started getting into country music, it was all about Eric Church, Brad Paisley, Keith Urban and so many others. When I saw Garth Brooks perform live, that changed my life. He showed me what a real entertainer looks like. I listen to so much music that inspirations change almost daily for me it seems, and although I have influences from all kinds of genres, Country always seems to feel like home.

Based on my influences, I’ve tried to take bits and pieces from many different artists and genres and put them all together to create my own sound. I love the big guitars in Rock music but I also love the lyrical vibe of a lot of Pop or RnB, as well as the feel of country music. It’s always been hard for me to answer this question, but I like to have some songs that tell a story and make the listener feel something, but I also love to have fun upbeat songs that really get people excited and having fun!

How did your new single “More Than Whiskey” come about?

I was messaging Meghan Patrick, who’s been a friend of mine for a long time, and we were talking about new songs. I said I was looking for my next single and asked if she had anything kicking around that might be a fit for me. She sent over the demo that she wrote with Aaron Goodvin and Skip Black, and right away I fell in love with it. I sent the demo to my team and everyone was on board, so we went ahead and recorded it! So I definitely owe Meghan one big time for this.

Just like how I shaped my sound based on my influences, you can expect some songs that are story and lyrically driven and you can definitely expect some up-tempo excitement and party driven atmosphere from our shows. I started playing music in bars, so typically the louder and wilder the crowd is the better for me. You can expect my band and I to come out and give you everything we got every night!

Anywhere you listen to music, you can find me! Whether it’s Spotify, Apple, Amazon, Youtube…or many of the other streaming platforms, or social media outlets, you can find all my stuff there.