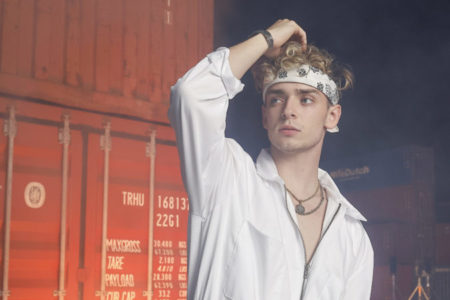 “Alberta sensation Josh Beauchamp represents Canada in the 18-member global pop group Now United. With over 1 billion video views on YouTube to date, Now United is the world’s first ever global pop group comprised of 18 different singers and dancers from 18 different countries. The group was created by Simon Fuller, the creative mastermind behind American Idol, the Spice Girls, and over 500 no.1 hit singles. One of the earliest members to join the group, 21-year-old Josh Beauchamp was born in St. Albert, Alberta and grew up with a love for dance. Training from a young age, Josh competed with various dance crews including Edmonton’s NXG Company and immaBEAST in Los Angeles, CA. As an interest in singing developed alongside his dance career, it was only a matter of time before Josh combined his passions and took to the stage as a truly versatile performer. Josh began his journey with Now United when the group was launched by Simon Fuller in 2017. Since its formation, Now United has received multiple awards and nominations, including an MTV Video Music Award nomination for Best Group (2020), and multiple Nickelodeon Kids Choice Awards. With each member from a different country, this unique project has captivated the world while spanning across genres, cultures and languages”.

At what age did you know you wanted to be a dancer?

I started dancing at six years old, but I don’t think it was until I was fourteen or so that I decided I wanted to explore it further and actually make a career out of it.

Are you professionally trained? How did you develop your dance skills?

Yes! I’ve taken lessons in hip hop since I was six years old and have been trained in every style of hip hop, sometimes even by the creators of the styles themselves. At twelve years old I began to classically train in ballet, contemporary, modern, jazz and some other styles as well.

Who are some of your biggest music and dance influences?

In music, I would say Michael Jackson, Usher, Bruno Mars and Justin Timberlake. When it comes to dance, I’m inspired by Phillip Chbeeb, Josh Price, Julian Deguzman, Bailey Sok and so many others!

How would you describe your dance style?

I would describe my personal dance style as a fusion of hip-hop and contemporary, with a strong emphasis on intricate musicality.

My favourite song to dance to at the moment would be ‘Still Tippin’ by Mike Jones because it’s just a classic!

What can audiences expect from the Now United live shows?

Audiences can expect a mix of old songs, newer ones, and the absolute best time of their life! We’re a high energy crew and love what we do.

How does it feel to represent Canada in Now United?

I’m extremely proud to represent my country in this group! I do also feel the responsibility of that position as well, and I take it very seriously. I aim to be a good role model for our fans – something that I think is really important.