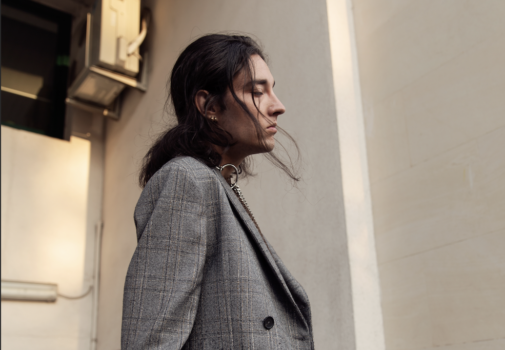 “Ottawa-born Laurence DaNova developed a passion for singing and the arts at a young age, singing in a band throughout his teens before he released Nine Hundred, his first self-produced EP with his former band, Vista Del Mar. In 2019, Laurence began to work with producers to develop his unique sound, combining experimental pop, neo-soul, and alternative rock.  Following his series of well-received singles and videos, Laurence is back with “Marsupial,” a melancholy and downtempo track which showcases his vocals and reinterprets Leonard Corcuerea’s poem of the same name”.

When did you know you wanted to be a musician?
I knew I wanted to be a singer since I was around 3-4 years old. I was inspired by music on the radio and the music my parents would play around the house. I would make my own songs using my fisher price tape recorder.

Are you trained? How did you develop your skills?
I began singing regularly in choirs when I was in elementary school and took singing lessons on and off until my teens. I also have a little bit of classical vocal training. I developed my specific singing style through experimentation on my own.

How would you describe your sound?
I would describe my sound as alternative pop with worldbeat and soul influences.

What’s your favourite tune in your repertoire and why?
My favourite song of mine is almost always the song I’ve released most recently. I love “Marsupial” because I feel like its sound matches the lyrics perfectly- it’s dark and it keeps you on your toes while not being too assertive. It’s also very unique in its instrumentation. I used the synth in Enya’s Boadicea as a reference and I also used mellotron and Celtic Dulcimer when producing it with Isaiah Gibbons. Another one of my favourites in my song “Rest Easy”. Making that song was the most cathartic experience I’ve had making music. Everything just fell into place and I feel like the song gives people the feeling of nostalgia when they first hear it. The instrumentation also has lots of asian influences including guzheng and several flutes- it reminds me of my times traveling and living in Southeast Asia.

What can audiences expect from one of your live shows?
I haven’t been able to perform in a while due to the pandemic but when I do, I would love to have some live instruments and cool visuals like light projections and film projections.

Where can we find your music?
My music is on all streaming platforms! Just search Laurence DaNova- I’m the only person with my name!