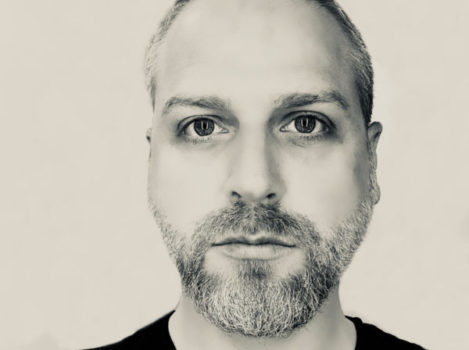 “Kodiak Arcade is a passion project where lifelong television composer, Graeme Cornies, is reversing the usual process. Instead of writing music for pictures, he is creating visual art posted to Instagram, Twitter and YouTube depicting the feelings and mental states of his music. His latest single “Why Pretend” is about the moment we acknowledge when a relationship is coming to a conclusion instead of pretending everything is fine, so that both people can begin a new chapter on separate paths. Graeme adds, “Sometimes we grow in different directions. Sometimes we get caught in a loop of wondering “if I had just… would they have… could it have all turned out differently?” and other unanswerable questions.” ”

When did you know you wanted to be a musician?
In grade 9, I played in a battle of the bands with my first real band. We won a chance to record a song at a studio in Toronto. That was ultimately a lack-lustre experience, but the club owner that hosted the battle of the bands offered us a few opening-act spots for all ages concerts. That opportunity ushered in years of performing my own songs with my best friends at The Embassy and Call the Office in London, Ontario. I saved my summer job money for studio time. I watched my Mom release albums as a harpist. I learned a half-broken 4-track inside and out, and when I started seeing my older friends sign up for recording engineering school in my final years of high school, it didn’t seem all that far fetched to try to make a living with music.

Are you trained? How did you develop your skills?
I faked reading music for almost 8 years before I committed to learning. I was in group lessons as a kid, but I got through it each year by watching other people play the tune in question and copying their movements. In retrospect, I’m glad I did! While I didn’t realize it at the time, it was developing my ear and when it came time to really try to learn theory so that I could pass entrance exams to study music at University, it was more or less a matter of attaching words to sounds I had already memorized over years of playing and writing. I still write and play intuitively, but now I can also think about what I’m playing if I ever need to communicate with another artist that approaches music that way.

Who are some of your biggest musical influences?
It might seem like there isn’t much continuity here, but I’m wildly attracted to artists that have a very distinct sonic world of their own. Artists like Peter Gabriel, Blind Melon, Radiohead, Trent Reznor, Brian Eno, Bjork, Sigor Rós and Muse. Each one of those artists have made big impressions on me over the years. As a project though, Kodiak Arcade has been largely inspired by Madeon, MGMT, Tycho, Jungle, Vulfpeck and Washed out. There are a bunch more, but loving these artists made me want to play with the sound I’m developing now.

How would you describe your sound?
People have been calling it everything from electro-pop to indie rock to psychedelic-chill, but whatever it is, I hope that it communicates a certain dreamy quality, that it sounds imaginative and like something of its own. I don’t think I’m consciously building a style, but I think a style is emerging with each new single. I might have a better answer in a few years.

What’s your favourite tune in your repertoire and why?
So far it’s either “Believer” or “Something Real”. Each of those tracks came to encapsulate the feeling I was going for, and they have a mood-propelling exuberance to them once they get going. Both make me feel deeply, while making my head bop and that’s the kind of thing I hope to do more of.

What can audiences expect from one of your live shows?
So far, Kodiak Arcade is strictly a recording project. I’m on contract to continue scoring a number of television shows, and those timelines keep me in the studio year-round. I wouldn’t have it any other way. That said, you can expect us to continue to release a ton of visual content as I continue to explore ways to visually depict the character of our music. Our Instagram, Twitter and YouTube have a bunch of material that you won’t find anywhere else.

Where can we find your music?
Spotify, Apple Music and all the rest of the standard streaming services. Wherever you listen to music now, chances are we’re there to be discovered.